Training In The Call Of Duty 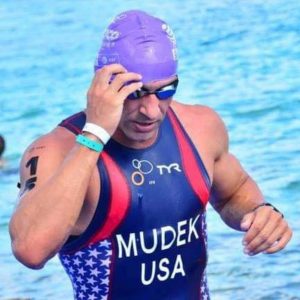 In 2015, U.S. Army Officer and triathlete Dave Mudek was a commander in the Global Response Force at Fort Bragg, North Carolina when the military switched his orders and sent him to be a war games observer/controller/trainer (OCT) for two years deep in the Louisiana swamps. He had just finished the triathlon season.  Dave had just placed 7th in his amateur age group at an Ironman and his goal was to earn his Pro card.

Mudek’s “home” for three weeks each month was a tactical truck – a Humvee – where he ate, drank, worked and slept. For the fourth week of the month, he was released for resupply. Committed to maintaining and building his hard-earned triathlon fitness, Mudek outfitted his tactical truck with a bike trainer and Vasa’s Spacesaver SwimErg and turned his Humvee living quarters into a private gym.

“I knew my training was going to take a large hit,” said Mudek. “Colleagues all told me the same thing—it’s impossible to maintain a high level of fitness with this assignment. We only get 4-5 hours a night to sleep. My mentors’ used jump ropes and dumbbells in their trucks. I requested a high back Humvee where I’d have space for indoor swim training on a Vasa SpaceSaver SwimErg and cycling on a Wahoo Kick’r.”

His request was granted and for five months he trained in his truck.

Mudek’s backwater deployment was cut short when military brass realized it would be better for all if he was somewhere he could train and race. But months training in the Humvee permanently changed the way Mudek thinks about training.

“The idea of being confined to the back of a truck for workouts forced me into a 100% indoor training mentality where I used a bike trainer and SwimErg to maximize my training,” said Mudek. “When I returned to living in an apartment, I didn’t see any reason to stop training 100% inside.” 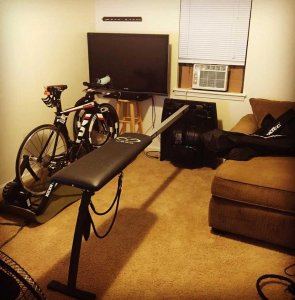 There’s nothing fun about training indoors according to Mudek, but that’s why he likes it. Indoor training is Mudek’s mindfulness practice. It lets him pull out of things going on around him.

“Low stimulus lets you focus on what you’re doing,” said Mudek. “I am not the fastest swimmer. When I get hit in an on open water swim or have a bad spot in the pack, my mind can drift from my race. While indoor swim training on the Vasa, I practice staying focused. I pass on Netflix, I try to keep my mind blank, and I let go of thoughts that come up extraneous to what I’m doing. I bring my mind back to my power numbers, cadence and how my elbows look on the SwimErg. Most athletes don’t want to hear it, but being indoors, I am in the moment.”

Mudek also gained insights into how to train different body systems. “Before I found Vasa, I was trying to figure out how to work out different intensity zones and metabolic systems. Using the Vasa pushed that concept to the forefront for me, and it helped me validate the importance of that approach to training.” 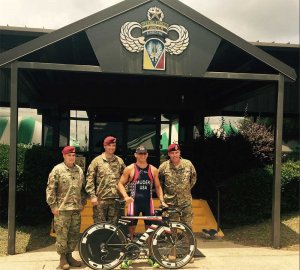 Out of the swamps, and stationed at Fort Polk, Mudek has an 80-minute commute to the nearest pool. To swim in a pool, he needs a five-hour block of time, which is another reason Vasa’s SwimErg was a game changer for him.

“You can do almost any swim workout while indoor swim training on the Vasa from 100’s at a set pace to threshold tests,” said Mudek. “It’s a phenomenal training tool, especially for working on stroke specifics you can’t address in the water. Set up a mirror next to the trainer and you can see what you’re doing right and what you’re doing wrong.”

Mudek says Vasa SwimErg workouts are better for open water swim training than most masters swim team pool workouts, both for himself and for athletes he coaches.

“A lot of athletes go to masters swim practice and train for pool-based competitive swimming, which is usually short and anaerobic, maybe pushing three minutes,” says Mudek. “You go hard, and you take long breaks. Indoor swim training on the Vasa I can do that, I can do HIIT sessions, but I can also do tempo training. I can dial in intensity and time. It gives me better load control. I can look at power and form, I can better target specific metabolic systems.”

Fort Bragg is home to paratroopers, Supersoldiers, Delta forces, and other Special Forces. They have sports teams and being a soldier and an athlete is encouraged. When Mudek was a commander at Fort Bragg, he ran and swam on teams.

Fort Polk had no teams, so in addition to putting his Masters in Project Management to work for the U.S. Military there, he’s started coaching.  Dave is the head coach and owner of Triple Victor Sports.  He works with more than 260 athletes across the world, most of whom are active duty service members, classmates, retired military, and friends from West Point. 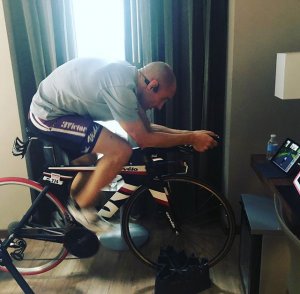 His strategy is to take any problem or goal and manage it by putting it into smaller tasks or steps. “By breaking goals into small steps you can reach massive achievements, tackling relationship issues in the process, by trusting teammates, balancing job stress, life, and family,” says Mudek. “Systematic training teaches planning and confidence. It can remake a person.”

He asks any athlete who works with him for a one-year minimum commitment.  He coached an officer with bulging discs in her back sustained from a Humvee rollover. Military docs told her if it hurts when you run, don’t run. But she wanted to do a marathon.”

“You can’t tell an officer ‘don’t run,’” says Mudek. “Your soldiers expect you to run.”

Mudek used a whole body approach to get her moving again. He teamed up with her physical therapist, an internal medicine doc and a podiatrist. She worked hard and she did it. A post-marathon checkup showed her back improving. “When she crossed the finish line at Ironman Texas, she had strength and confidence, which she had achieved one step at a time with a thoughtfully designed smart approach,” said Mudek.

“It isn’t the beauty within the view, but the struggle within the climb,” he writes on his website. “We don’t fully have control of an outcome,” he says. “So I don’t focus as much on results. You adapt training and environment and keep doing that until you find what works. One of my rules is that we don’t overcome our limits but we expand and push our comfort zone. Expanding what you are comfortable doing makes achieving a goal possible. It’s about gaining a new outlook on life on wellbeing, and it includes everything that’s going on.” 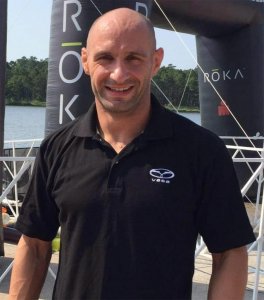 Mudek says triathlons can be transformative. “I’ve coached people from the couch to completing an Ironman,” says Mudek. “They progress through the steps and build confidence, and they’re a different person when they cross the finish line, which translates to the rest of life. When you’re fit you make better life decisions. I like to use habit-based coaching. Choosing to eat lean protein, for example. That’s not what most people think of as dieting. And it’s not. It’s a good habit, and in the long run, it’ll have the same effect. My goal for the athletes I coach is to help them make better choices, and for those choices to become habitual. When athletes truly invest in physical fitness it leads to better life decisions and overall wellness. I push my athletes to dedicate to that transition. The more they move through that continuum, the more they learn about themselves.”

“I train an athlete on a Vasa and we see the benefits.  Then I send that athlete to the pool, and they want to swim in the water as they swim on the Vasa.” 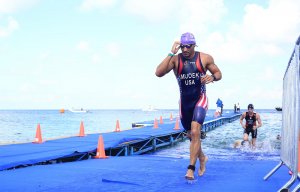 Mudek has had great success coaching athletes from afar with the Vasa as well. “I can set up tutorials on the Vasa without needing expensive video equipment. I film myself doing a stroke right and wrong and I can teach athletes the difference.”

Mudek likes the “real feel” of indoor swim training with Vasa, the way the bench moves forward when you apply more force. “Vasa lets athletes feel the transition as they work through their pull, which makes it much easier for athletes to replicate a good pull in the water,” said Mudek. “You can feel the paddle brush all the way down and get close to the bench. In the pool, I am getting Vasa-trained athletes to replicate that movement and feel their hand push past their hip before they start to recover.”

Whether you’re a swimmer, triathlete, or out-of-shape soldier, Mudek offers this thought: Get out and push your comfort zone.

“People are content to be comfortable, and they just glide through. If push your comfort zone 1%, and you do that 365 days a year, you’ll see massive improvement just one year later. You don’t need to conquer your fears today. If you grow 1% every day, in the end, it’s exponential growth, and you’ll be surprised what you can achieve.”

Dave is a retired U.S. Army Officer who takes great pride in helping athletes improve their health while crushing their personal goals. Dave is founder of Triple Victor Sports and works with clients of all levels through the coaching programs to include mentoring the age group elite team, 3V Racing, which reached a top team ranking of 7th in the world. Coach Dave’s athletes have raced at all levels to include the IRONMAN World Championships, IRONMAN 70.3 World Championships, ITU World Championships, and USA Triathlon National Championships. As an athlete himself Dave enjoys racing draft-legal sprint, IRONMAN 70.3 and IRONMAN events with a keen awareness of what it takes to race at the highest levels of armature triathlon.  Since 2015, Dave has qualified for ten world champions at multiple distances to include draft-legal sprint, IRONMAN 70.3 and IRONMAN. Dave is a USA Triathlon, USA Cycling, Precision Nutrition & IRONMAN Certified Coach.