This entire clinic is presented in 5 blog posts, each with one of Karlyn’s five essential technique focus points:

In order to gain the most power in the freestyle stroke, the fingertips need to be straightforward.  Coach Karlyn Pipes demonstrates how strength diminishes when the elbows are straightened or hands are pointed outward or inward. Keep the fingers pointed straight forward to obtain an Early Vertical Forearm (EVF).

In Part 1, we learned why it is important and how to properly set up the stroke with hand placement.   The second technique focus point is called Fingertip Orientation.


Start by reaching your arms and hands up, as if stretching to do a pull-up.  Next, while keeping fingertips to forearm in a straight line (like a canoe blade), lightly set your forearms & hands on top of that box. You’ll notice that your fingertips are oriented to point straight forward. 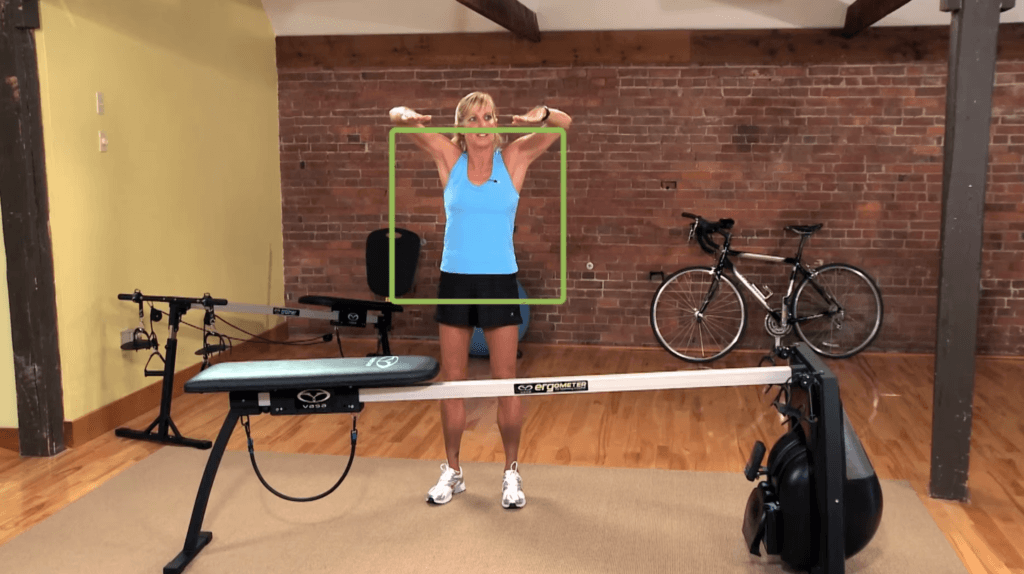 Figure 1 – Imagine a cardboard box out in front of you with the flat surface at eye level.

Your body position while swimming in the water (or while swimming Freestyle on the Vasa SwimErg) would position your hand & forearm pointed straight down toward the bottom of the pool (or floor). When a swimmer’s fingertip orientation is straight forward like this, there is greater access to generating more power from the larger muscles of the back, including the lats, as opposed to using the smaller muscles of shoulders & arms.

In Figure 2, the athlete’s fingertips are oriented facing forward.  When he presses down on Coach Karlyn’s hands, he’s strong & can generate power since he is pushing with the heel of his hands (not his fingertips). 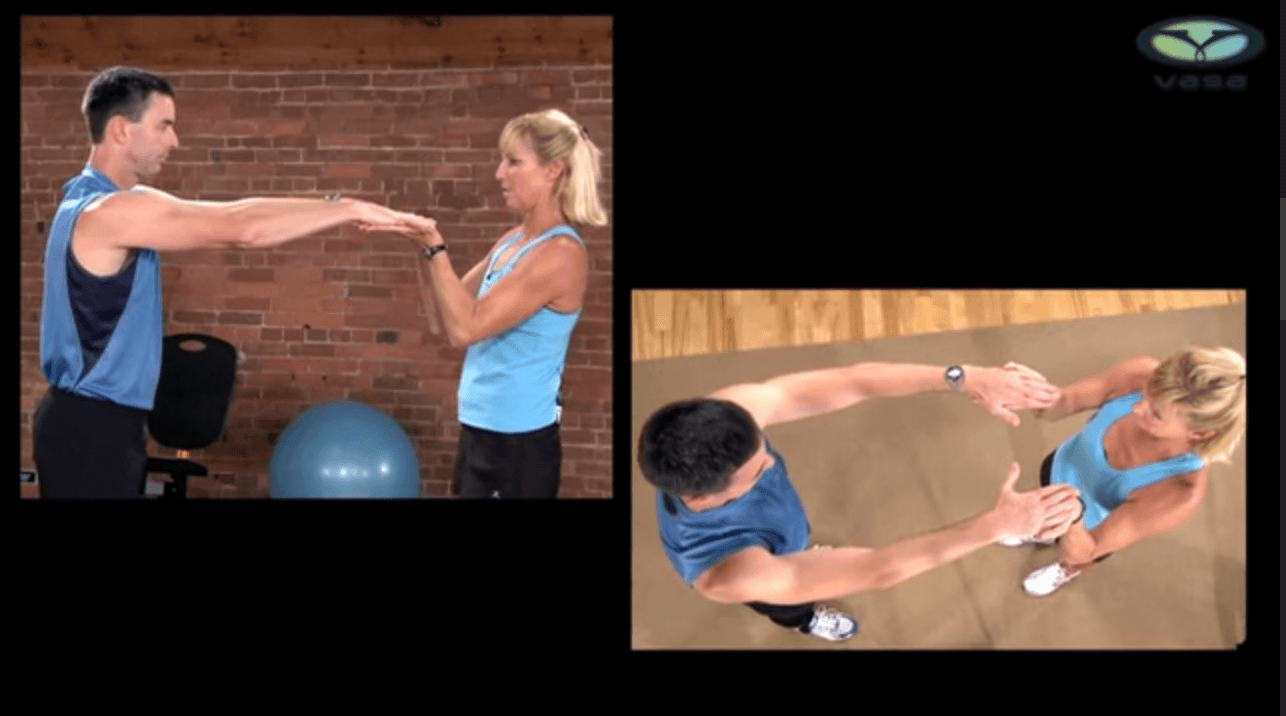 However, in Figure 3, when he points his fingertips inward or slightly down, he cannot generate as much strength.  He loses a lot of power when he straightens out his arms and presses down as well. 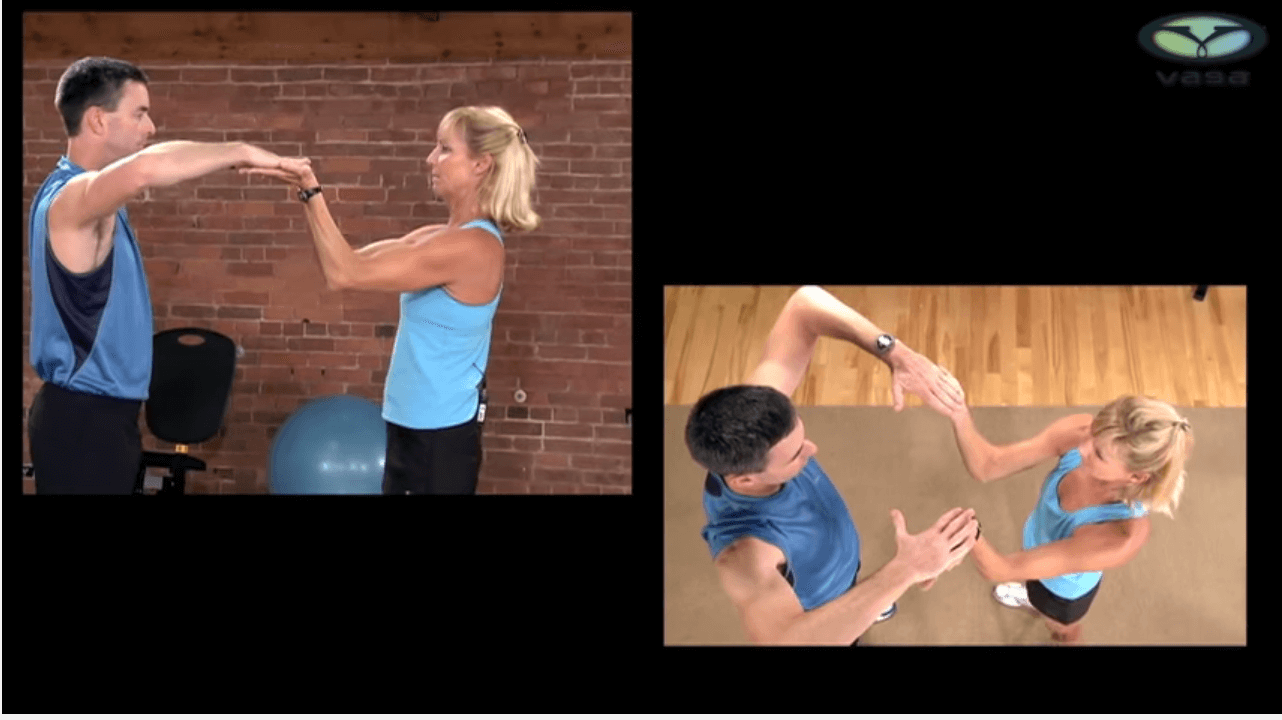 In Figure 4, When we press down with his fingertips pointing outward, we lose power again. 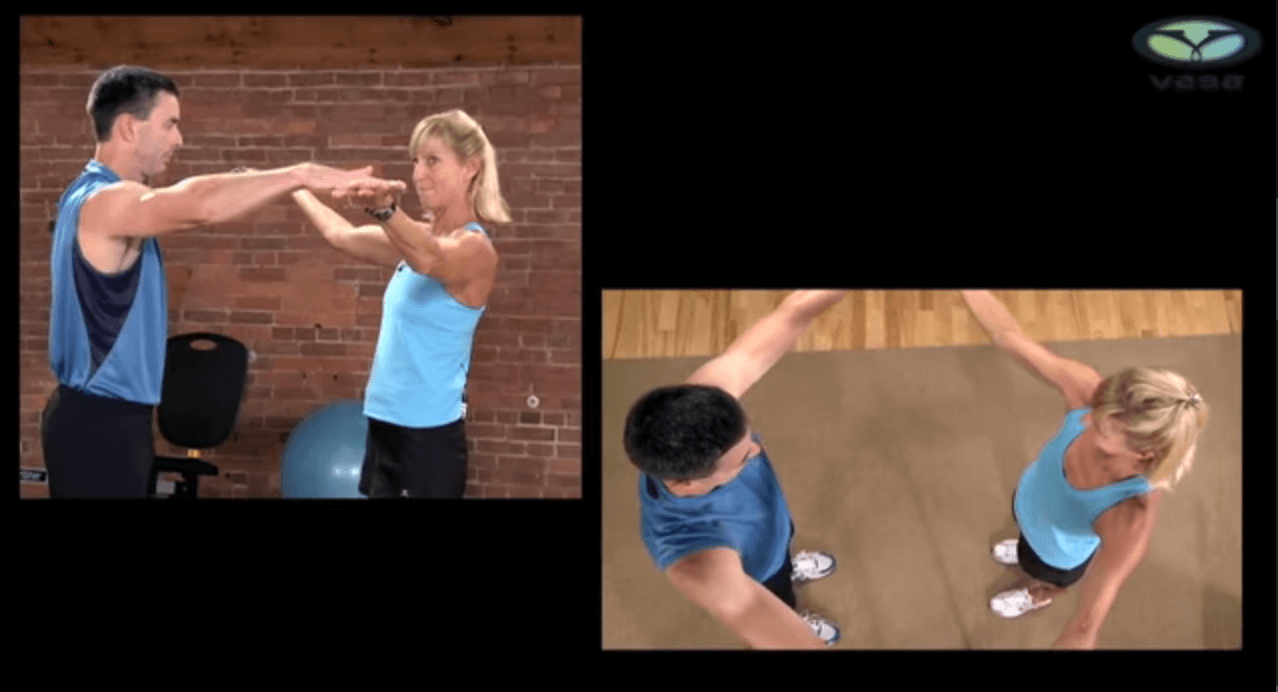 When the fingertips & forearms are facing forward, you will be able to generate the most power.   Notice in Figure 5, the fingers are pointed towards the front, which in the water is essentially a high elbow catch position. Notice the fingers should not be pointed inward, outward or crossed over mid-line. 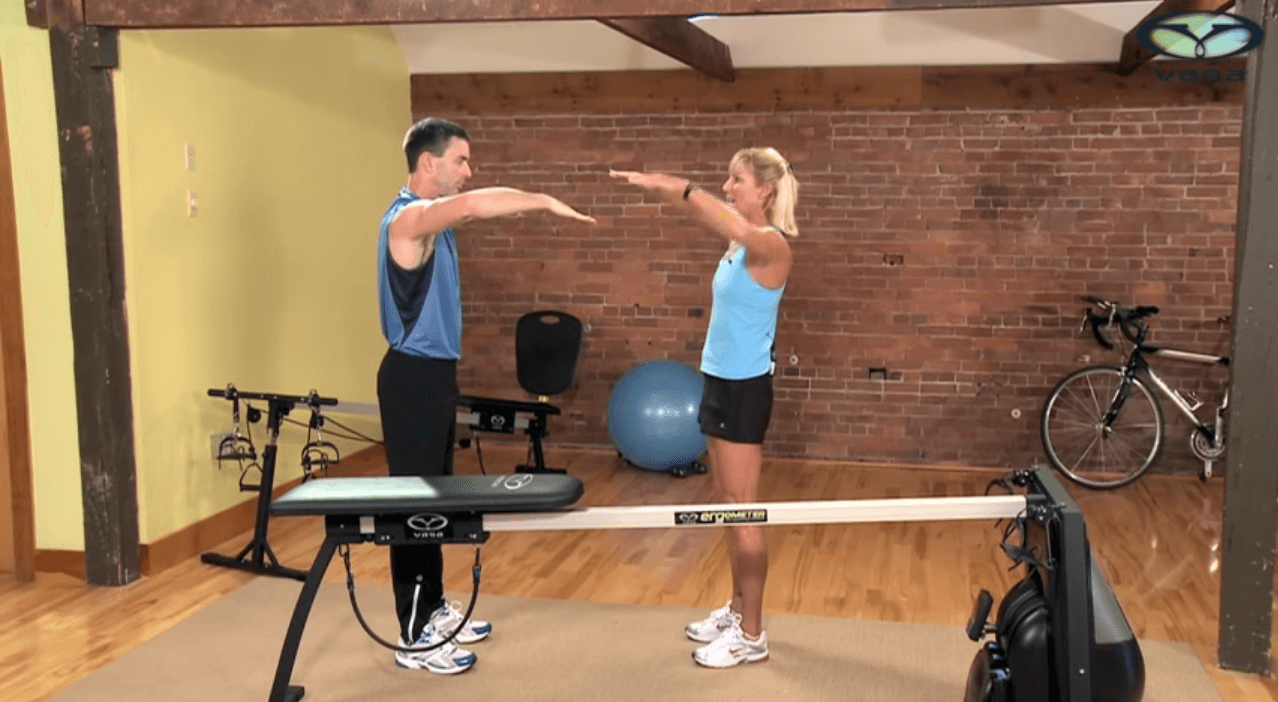 Be sure to avoid letting the hand get in front of the elbow as shown in Figure 6. 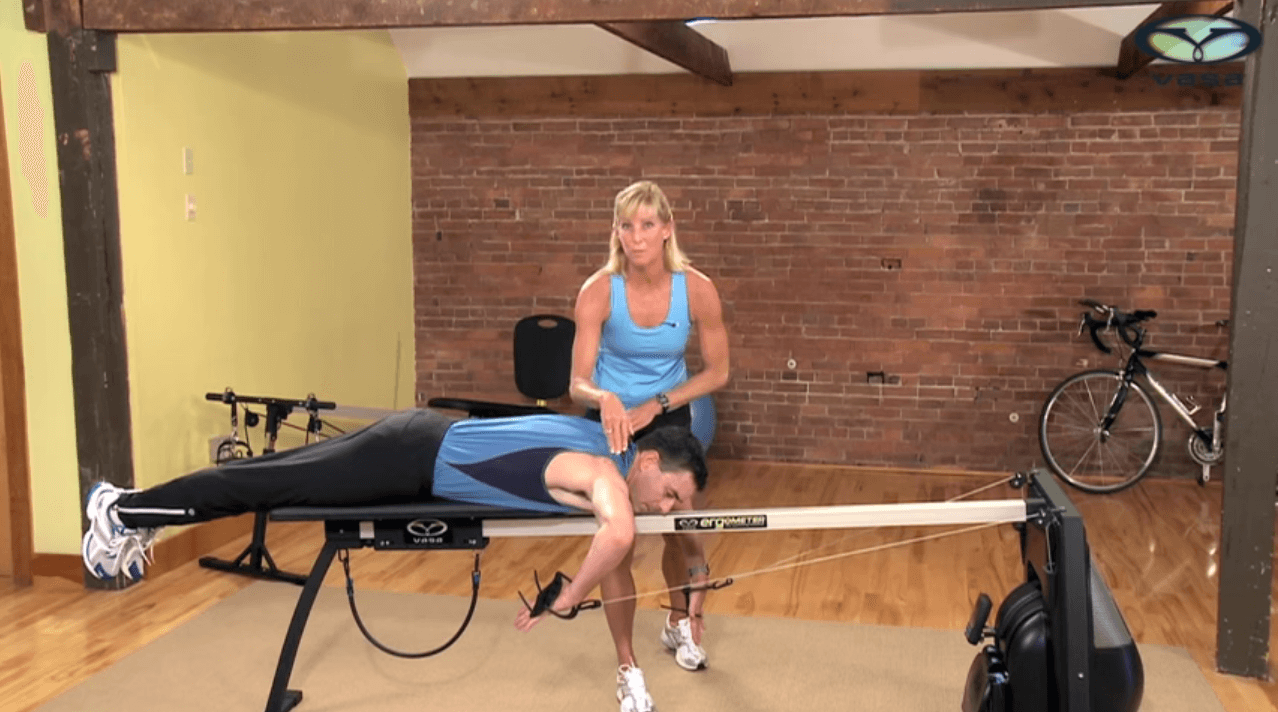 The dropped elbow with the fingertips pointed forward is not good and the most potentially damaging due to internal rotation.  This can be problematic to the upper shoulder at the rotator cuff.  If the swimmer lets the hand get in front on his elbow and pulls with force,  it could potentially injure the rotator cuff. 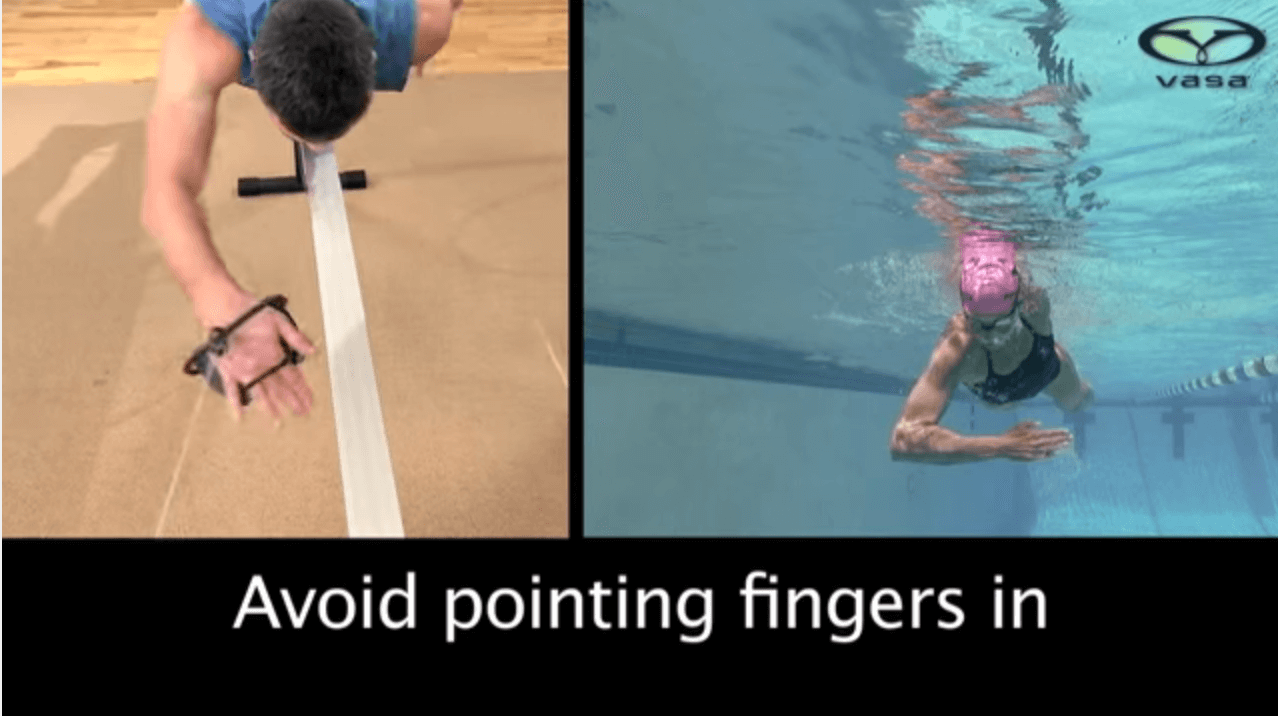 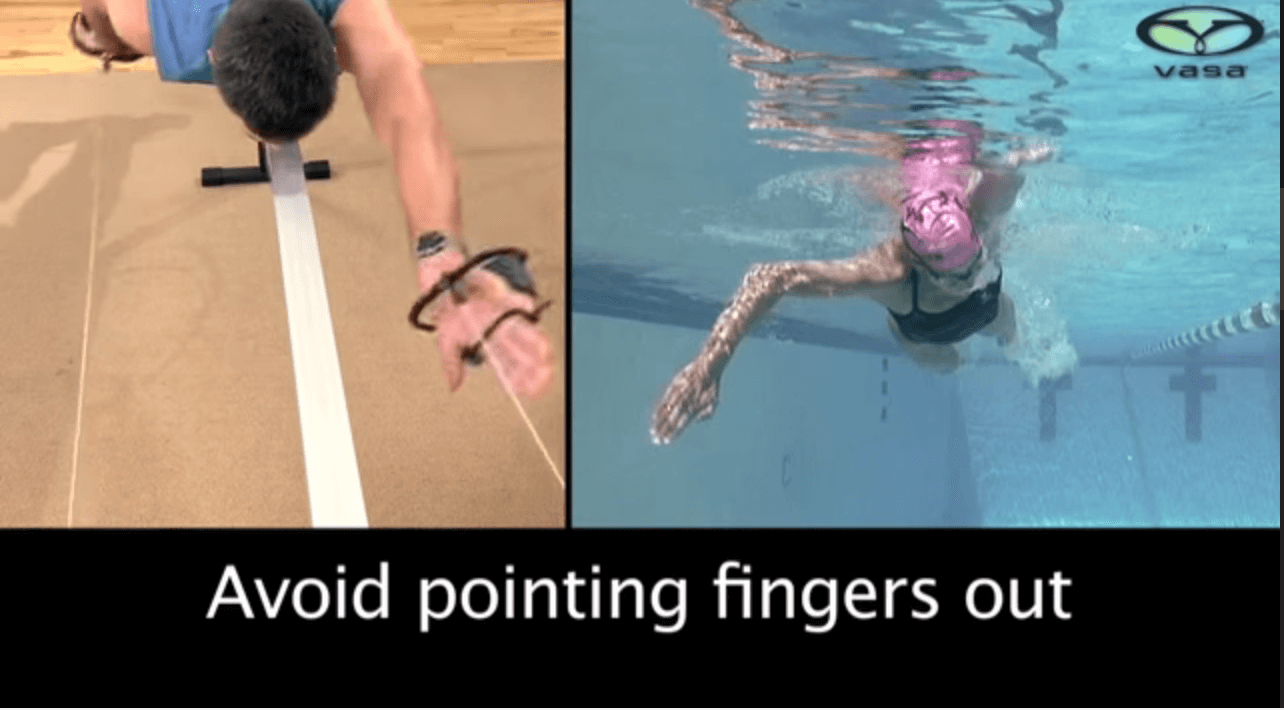 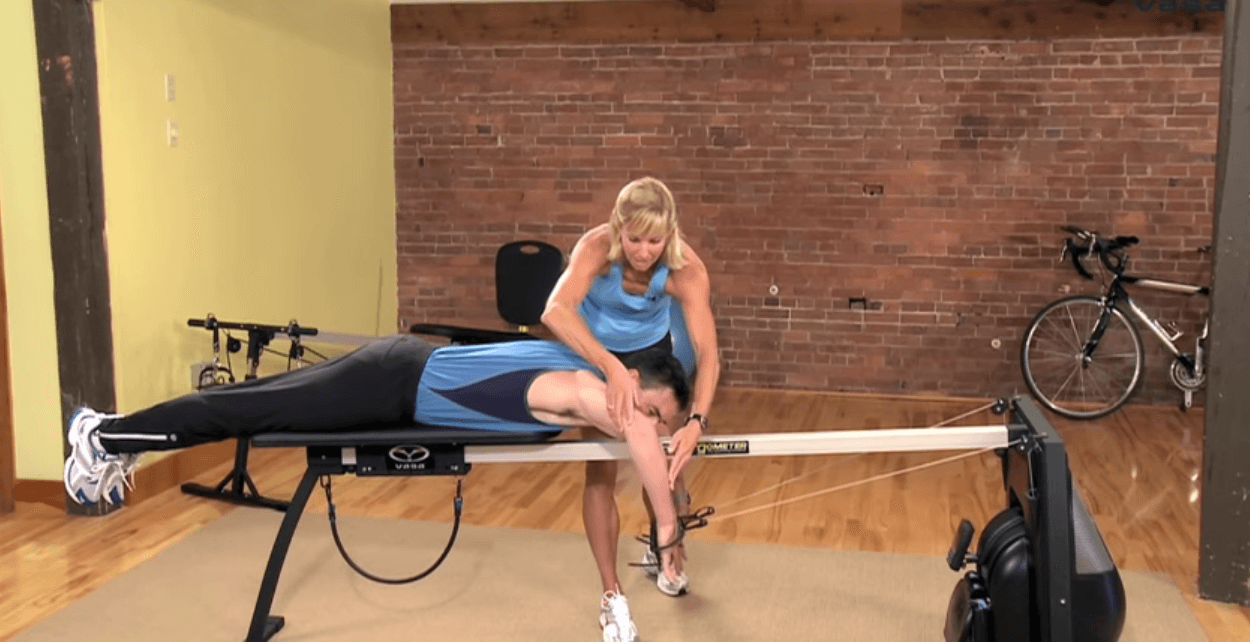 Figures 9, 10 & 11  illustrate the ideal pulling position with a high elbow catch, fingertips & forearm pointed at the bottom of the pool (or floor), and as you pull back,  the armpit closes shut. 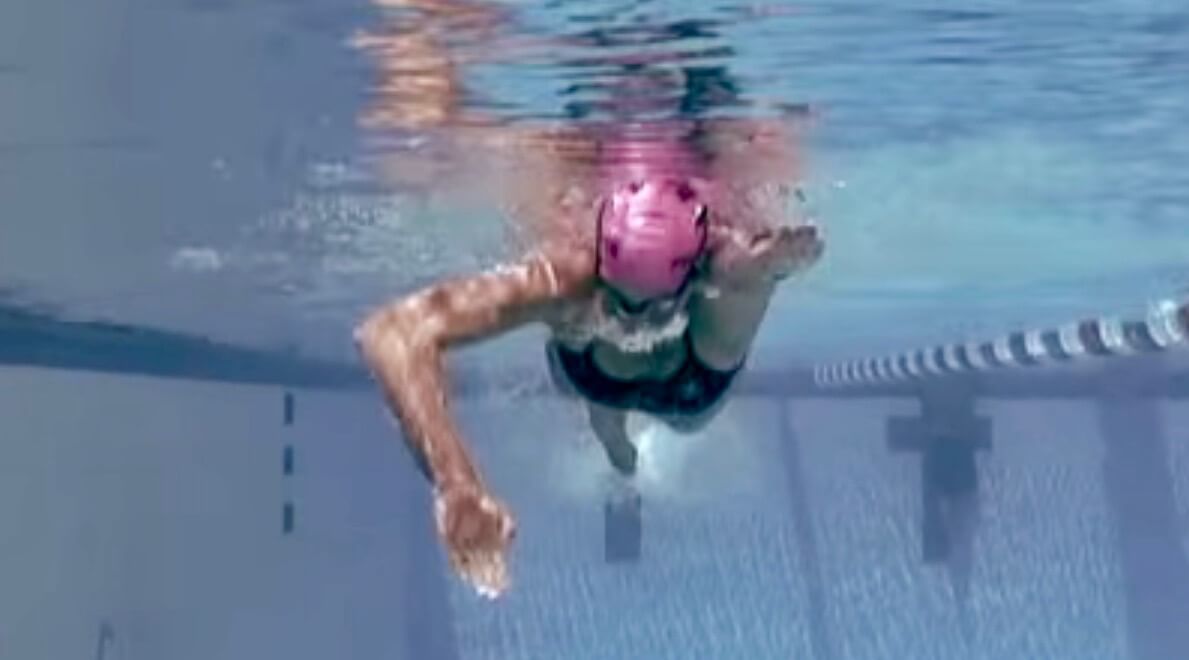 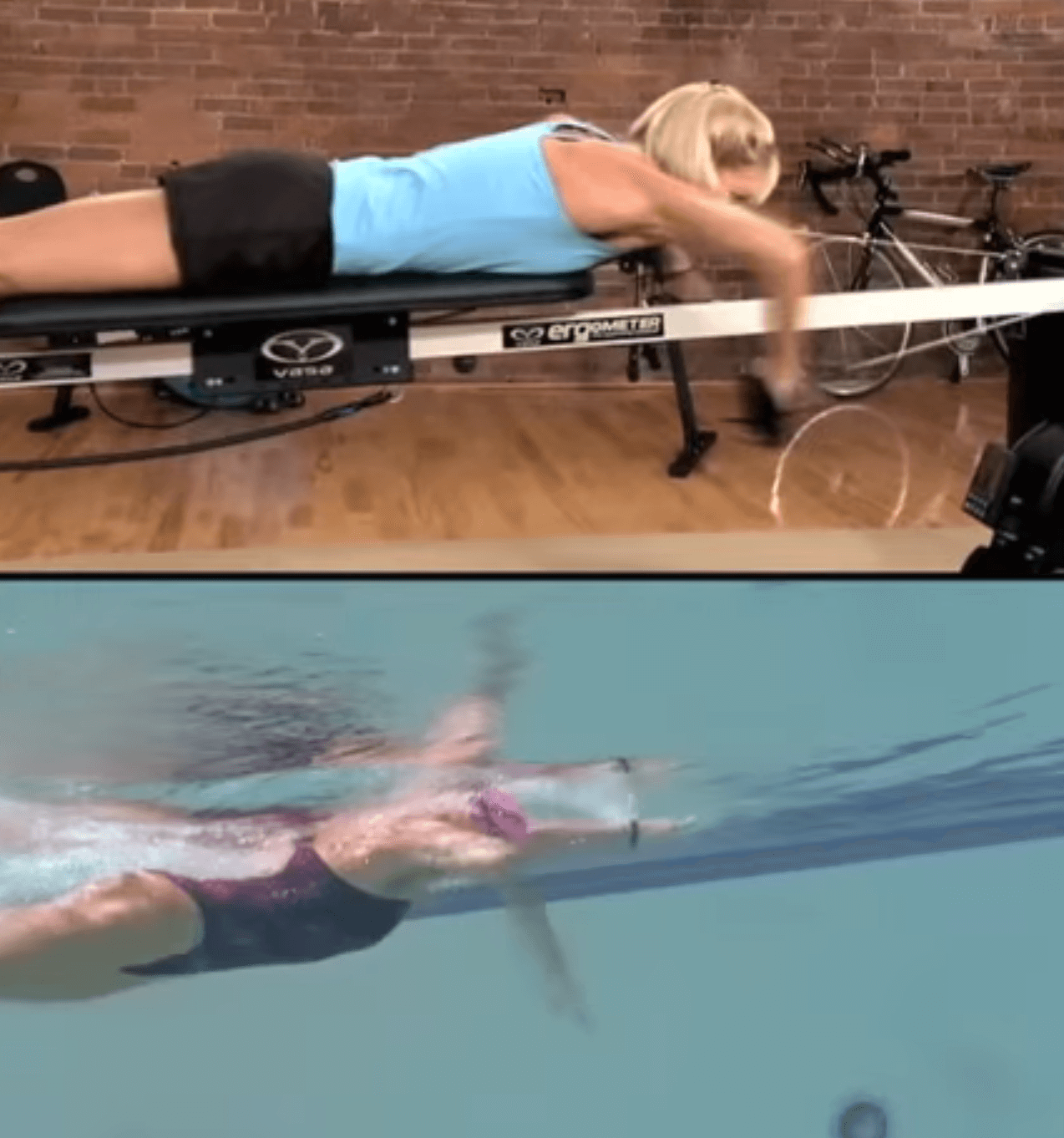 Continue on to PART 3. Wrist Awareness and Karlyn’s secret weapon: The Power of the Y

To view all 5 parts of the Swim Clinic, click on the links below:

Bio:  Coach Karlyn Pipes is an excellent and very popular swim technique coach.  She practices what she coaches as an accomplished Masters Swimming World Record Holder. She has an appetite for success and it shows. Voted one of the top ten masters swimmers of all-time, she holds over 200+ FINA Masters World records, of which 47 are still current. In early 2017, she broke six more FINA Masters World Records while competing in Europe.

Swim Coaching, Swimming, Triathlon, Triathlon Coaching, Interview, Triathletes, Triathlon swim training, Masters swimming, Ironman swim training
Comments are off for this post.
Setbacks are opportunities to use creativity, grit, and determination to swim stronger. It takes a special person to turn adversity into successful learning and improvements.  There are many forms of setbacks, whether they be an injury, illness, limited pool availability, race cancellations, and more. Over the years, we’ve been fortunate that Vasa athletes and coaches […]
15
Apr

Swim Coaching, Swimming, Triathlon, Triathlon Coaching, General Fitness, Triathletes, Swimming workouts, Triathlon swim training, Masters swimming, Ironman swim training
Comments are off for this post.
This is part 3 in a series of blog posts where we ask important questions to successful coaches in the Vasa community.  Here are their answers to an important question: What are the primary differences in how triathletes & open water swimmers should approach swim training versus competitive pool swimmers?  Coach Dan Daly: “Triathletes and […]
11
Apr

Swim Coaching, Swimming, Surfing, Triathlon, Triathlon Coaching, General Fitness, Triathletes, Swimming workouts, Triathlon swim training, Masters swimming, Ironman swim training
Comments are off for this post.
How It Will Help You Swim Stronger, Better, Faster What? Swim at home without a pool? Yes, you can and thousands of athletes have been doing it for years. Did you know that dryland training from home is one of the best ways for swimmers, triathletes, and surfers to stay consistent and make improvements in […]
29
Mar

How to swim faster in open water

Swim Coaching, Swimming, Triathlon, Triathlon swim training, Masters swimming, Ironman swim training
Comments are off for this post.
2012 US Olympian Alex Meyer describes how Vasa training helped his freestyle swimming technique. An epiphany moment   “I had this epiphany moment one day during practice where I didn’t feel like I was swimming very well. I imagined myself training on the Vasa SwimErg. As a result, I kept my elbow a little bit higher […]