Vasa at the Summer Games 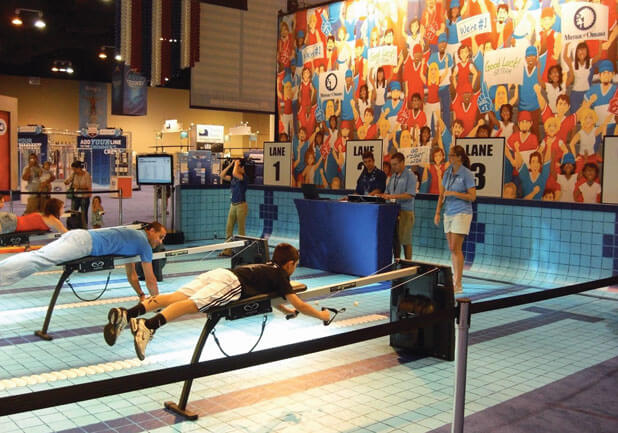 When the Olympics begin in London this week, swim fans no doubt will witness the fastest times in the history of the world. And as unlikely as it may sound, some of that speed comes from training on a machine created right here in Vermont — originally for cross-country skiers. Pretty crazy, huh?

Well, swimming is a crazy sport. Pulling and kicking for miles and miles at a time, two to four hours a day, six days a week, year after year, is not normal. It’s lonely, mind-numbing, solitary work for an athlete, even when surrounded by teammates and coaches. Boredom just comes with the territory — you can’t see, hear or speak for the majority of a water-based workout. A lot of would-be swimmers simply can’t take the monotony. I know, because I endured that tedium for 20 years.

In fact, I qualified for the Olympic Trials in 1988. But, alas, my shoulders didn’t survive the training. I needed major surgery just to keep the right one in its socket. Suddenly, faster than anyone could say, “That sucks,” my swimming career was a total wash.

If only there had been other ways to train for my site-specific sport — a way in which I could have had my head above the water to rest a weary body and mind. Or, perhaps more importantly, a way in which weaknesses in my stroke could have been assessed and corrected before I was permanently injured.

Triathlon swim training, Masters swimming, Triathlon, Ironman swim training, Triathlon Coaching, Triathletes, Swim Coaching, Swimming
Comments are off for this post.
Part 2: How I justified my decision to get a Vasa Trainer Pro to my spouse! (This article is hypothetical and based on stories from many “Jack & Jill Vasa athletes.) As described in Part 1 of this series, I have loved swimming since starting summer swim league at age six and have been competitive […]
1
Aug

Triathletes, Swimming workouts, Triathlon swim training, Masters swimming, Ironman swim training, Triathlon, Triathlon Coaching, Swim Coaching, Swimming
Comments are off for this post.
A common limiter for many swimmers is the tendency to maintain the exact same hand speed through the entire stroke.  This is especially noticeable in those who began swimming as an adult. Top masters swimming coach Eric Neilsen initially brought this concept to our attention. He refers to this limiter as swimming with a “monospeed” […]