When Disaster Strikes, Vasa Indoor Trainers Might Save Your Open Water Race or Channel Swim 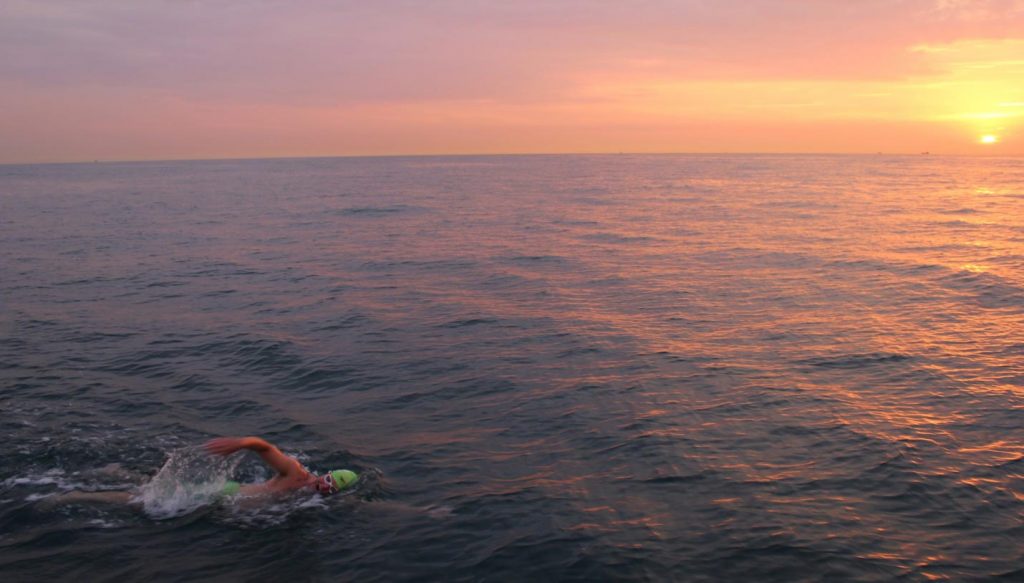 For a hearty subset of swimmers, those who brave cold, rough water in pursuit of the far shore, a standard approach to long-distance swim training is to just keep swimming. When preparing for a swim of 20 miles or more, there is some wisdom to being able to ready your body and mind for the rigors of swimming for 12 hours, 15 hours, or more by just swimming long and steady as much as possible.

But there’s also room in the long-distance swim training lineup for a bit of variety. Maintaining and boosting speed can be an enormous help for swimmers aiming to go the distance. If you don’t have a second gear — the reserved speed to sprint when needed — you might get creamed by a tanker or miss a changing tide. Such forces are unforgiving; time and tide wait for no swimmer.

For swimmers training for an English Channel swim or another long-distance open water swim, adding in some dryland work on a Vasa indoor swim trainer will build valuable swim-specific strength and power to help you maintain that second gear when you’ve added a lot of volume to your weekly swimming.

Paula Yankauskas, a highly accomplished marathon swimmer from Hyde Park, Vermont, added a Vasa Trainer to her protocol while ramping up to swim the English Channel in 2016 and says it helped her get faster and prepare for her many marathon swims. 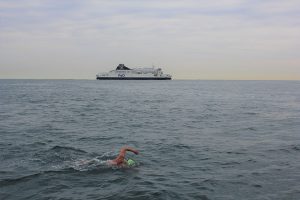 “I spent a lot of time on it,” she says, as the Vasa SwimErg helped her focus her workouts and extend the work she was doing in the pool. Consistent long distance swim training with the Vasa helped her get faster and stronger. “It’s a good, swim-specific workout,” she says and she’s enjoyed building new workouts and patterns to keep herself engaged with her training.

“I did a lot of 3-2-1 intervals,” she says, explaining that she’ll do a cycle of five or 10 descending sets of 30-20-10 strokes with a minute recovery in between. “I’ll do a warm-up before and a cool down after,” and just like that, a solid workout is in the books without significant travel time to and from the pool or open water training site.

So for Yankauskas, the SwimErg has augmented her in-water long-distance swim training and helped her gain speed and strength for the many impressive marathon swimmers she has completed since 2016.

For other swimmers, including Andy Jones of Swampscott, Massachusetts, working out on dryland made the difference between disaster and success. 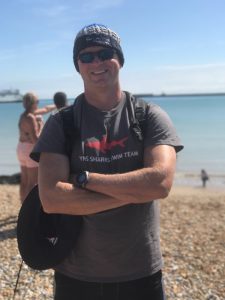 Jones was recovering from shoulder surgery in 2015 when he decided to set a goal for his recovery: A solo crossing of the English Channel in 2017. But additional injuries threatened that goal. “I had a pretty rough build-up to the Channel,” Jones says. In 2016 as he began ramping up his long-distance swim training intensity and “my left knee went out.” He needed a partial knee replacement as soon as possible.

He got his knee repaired, and then the muscles around the hip began giving him trouble. “I was having incredible sciatic pain. It was a hip failure,” he says. He needed a total hip replacement, one year out from the Channel. Definitely not the prognosis any swimmer training for the swim of his life wants to hear.

“I could still swim, I just had to be careful when I stopped that I wouldn’t end up doing a breaststroke kick because then I’d be in agony,” he says. “I stayed in the water as long as I could,” he says, but eventually the pain became too much to bear. That’s when he decided to get a Vasa SwimErg. “I could lay prone on the SwimErg and still train and I wouldn’t be in agony,” he says.

From Bad To Worse

He was scheduled for hip surgery, but — get this — his surgeon got injured and had to postpone the procedure. Desperate and getting uncomfortably close to his Channel swim window, Jones cast about for an alternative surgeon. In October 2016, he underwent hip surgery, a common and low-risk procedure that thousands of Americans undergo each year, most with no problems. But Jones’ procedure didn’t go well.

“I am the statistic,” he says. “Out of thousands of hip replacements, mine ended in total disaster. When I came to, I was in agony. It took a long time to tell the staff at the hospital that something was not normal,” he recalls. 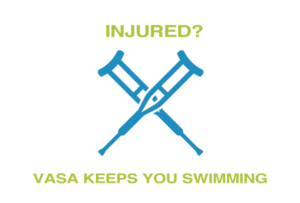 Eventually, the surgeon was called and he ordered an X-ray that revealed the new ball of the hip joint was forcing its way out through the suture. “At that point, the Channel was off,” Jones says because he would need to have revision surgery in February.

He went home, and soon thereafter, the hip dislocated one night, forcing an emergency revision. With that surgical hurdle cleared, Jones was able to get back to training. But again, things didn’t go to plan. “I wrecked my shoulder with sleeping on one side,” to keep pressure off the new hip, resulting in a lot of pain and stiffness.

In total, Jones says he was out of the pool entirely from October 2016 until February 2017. It was unclear whether he’d be wise in attempting to swim the Channel in August 2017, but he was determined to keep his date with open water’s most iconic crossing.

This means that when he was able to get back into the water in the spring of 2017, he hadn’t lost as much fitness or swim-specific strength as he might otherwise have lost. And that made a big difference. Prior to all the injuries, Jones was aiming for a sub-10-hour Channel crossing. He figured that might be impossible after all the setbacks.

Still, he managed to get across in a blazingly fast 10 hours, 28 minutes. “I’m very pleased with that time, given everything that went before it,” he says. He posted the second-fastest crossing of 2017 and earned an award for the “most successful swim against all odds” of the season from the Channel Swimming & Piloting Federation, one of two governing bodies that observe and ratifies the English Channel swims.

While most long-distance swimmers are hopefully going to be lucky enough to avoid the sort of slow-motion disaster of a training ramp up that Jones experienced when getting ready for a big swim, he says you can still benefit from adding a Vasa Trainer or Vasa SwimErg to your training protocol. 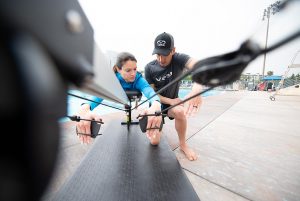 “It gives you a really long, low cadence and a powerful stroke.” Taking your training out of the water, where you’ve got a lot of things to worry about, can help you tune into what makes for a better swim stroke. “In open water, you’re breathing and sighting and maybe not putting as much focus into the muscles as you could.”

And when trying to swim alongside another person (seeing as you should never swim in open water alone) or having to flip every 25 yards or 50 meters because of the wall in the pool, it can be challenging to “find the pace to just put the hammer down and go and go for 45 minutes. But the Vasa allowed me to do that,” Jones says. “Being able to just hit a rhythm” helped him build the power and stamina he needed to post a stellar English Channel swim.

Jones has some other big swims on his radar. He’s training a lot on his Vasa SwimErg. “I don’t want to lose my swimming ability,” he says. “When open water season starts, I want to be out there swimming  in the ocean.” But the next best thing is the Vasa. “It’s proving to be a godsend,” he says.

Swim Coaching, Swimming, Triathlon, Triathlon Coaching, Triathletes, Triathlon swim training
Comments are off for this post.
Yards Are Great, But Adding Dryland Workouts To Your Open Water Swim Race Training Adds That Extra Something For many elite open water swimmers—those who compete at the Olympic or FINA World Cup level and race on closed courses—their version of open water swim race training is a little different from what amateur channel swimmers […]
22
Apr

Swim Coaching, Swimming, Triathlon, Triathlon Coaching, Triathletes, Triathlon swim training
Comments are off for this post.
Open Water Swim Training For Recreational Swimmers & Triathletes Each year, the number of people participating in open water swims and triathlons continues to grow significantly. As more of us embrace new, more adventurous challenges, many of us are getting wet well beyond the confines of the concrete tank with focused open water swim training […]
30
Oct

Interview
Comments are off for this post.
Could you compete after a devastating injury? Here’s how Masters Swimmer Randy Rogers found his motivation.
22
Apr

Relections on the Open Water Festival and Crippen Cup 10k

News / About Vasa, Swim Coaching, Swimming, Triathlon, Triathlon Coaching, Triathletes, Triathlon swim training
Comments are off for this post.
April 10-13 I had the pleasure of representing Vasa at the Open Water Festival hosted by the Gulf Coast Swim Club.  It was a beautiful venue located at Miromar Lakes Beach & Golf Club in sunny Fort Myers, Florida. This was a welcomed destination coming from Vermont, where we still had snow on the ground! The […]