Yards Are Great, But Adding Dryland Workouts To Your Open Water Swim Race Training Adds That Extra Something 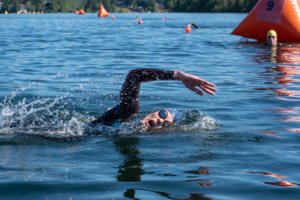 Many of these elite swimmers have deep roots in top-level pool training, and the discipline and techniques they’ve learned over the years in that venue can certainly translate to open water. But they need specialized open water swim race training to prepare them for the rigors of a 10K or 25K open water race against a field of tough, international competitors.

Alex Meyer is prime example of a former pool champion who successfully moved into elite open water swimming. He grew up swimming on a high-level club team in Ithaca, New York and swam for Harvard University before turning to FINA World Cup open water competitions. He represented the United States in the 2012 Olympic 10K open water event.

Across his lengthy pool career, Meyer used Vasa Trainers regularly, sometimes in unusual ways. “When I was a kid in middle school and even before that, we had them on deck at my club team in Ithaca. We didn’t do a ton with them, but we did do something I thought was pretty innovative,” which was to push the bench against the wall and practice pushing off and streamlining. “We’d do 10 or 20 or 30 banded jumps off the wall and those burned your legs really good,” he recalls.

Later on in his career, he used the Vasa Trainer more conventionally on deck at Harvard to build upper arm strength and power. Using a circuit approach along with medicine ball work, a jump rope, and core exercises, Meyer could get in a high-intensity workout in a short period. “I would often go swim down after that routine and I felt like I had a great hold on the water.” He says thinking about the form he’d hold on the Trainer or the SwimErg would help him maintain good technique in the water even when he was tired.

Other elite open water swimmers and their coaches have also used Vasa Trainers and SwimErgs with lots of success over the years. Jack Fabian, a storied coach based in New Hampshire, has used Vasa products since 2002 as he’s trained various swimmers, including his daughter Eva Fabian for elite competitions. He’s also trained a small army of age group and college swimmers and many triathletes over the years. Eva was the 2010 5K world champion and earned gold at the 2015 Pan-American Games in the 10K. She now trains in Israel and is hoping to compete in the Tokyo Games. 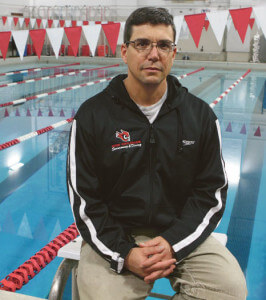 “When Eva was younger, I said, ‘we need to try using the Trainer for more swim-specific strength and a little bit of technique work on her. It takes you out of the water to see if you can tweak arm position and set up propulsion,” he says. That kind of fine-tuning helped hone her stroke for the water.

Later, “when the SwimErgs came out, I immediately saw an application for open water,” Fabian says. “It opened up the chance to do continuous swimming” well away from the constant interruption of a wall every 25 yards or meters, even in the dead of the worst New England winter when open water venues are frozen over.

Today, Fabian creates workout plans for his swimmers that leverage the data analysis opportunities the Vasa SwimErgs can provide, which are great for triathletes who are used to looking at copious amounts of data. For long-distance open water swimming, such workouts can be hugely beneficial, too, in building speed and power over a shorter time period than simply doing a lot of long, slow distance training.

“There’s a place for that training,” he says, but being able to build and shift into higher gears can make or break your race at the turn or finish line and can help you get ready for that race in less time than if you just try to amass as many yards as possible. You need to be able to tap into that higher-intensity reservoir of energy at critical moments, even in long-distance swims. 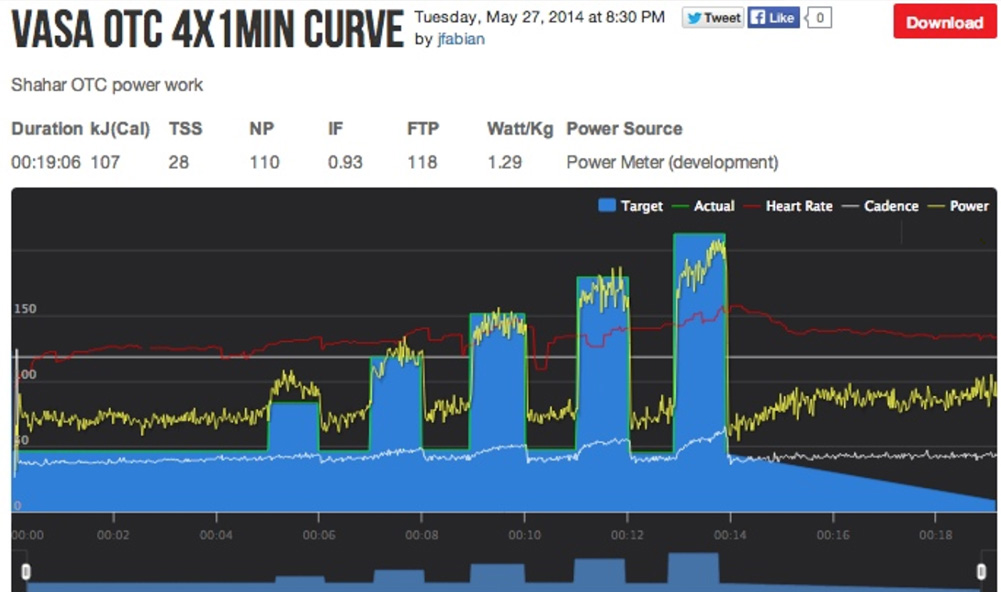 Still, there are definitely times when being able to strap in and just simulate a 30-minute test swim can be hugely beneficial, too. “With Eva, we’d work on trying to be consistent and work with different cadences. Fifty strokes per minute was a sweet spot for her to try and increase her power,” and some days, she’d just get in a long swim on the SwimErg while listening to music.

If you’re looking to add some dryland Vasa-based training sessions to prepare for a 10K or 25K open water race, try these tips and suggestions to get more out of your sessions: 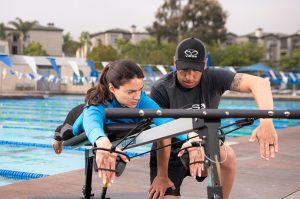 Start small. It might be tempting to jump right in and go gangbusters straight away. But as with any training tool, it’s best to ramp up slowly so as to avoid injury. In the early season, Meyer would often start with a pattern of 15 seconds of work and 30 seconds of rest on the SwimErg that would shift as he got deeper into the season. “I’d build up the work to rest ratio throughout the season.” He also would use both a SwimErg and the trainer in combination to get the different benefits each offer. “The Erg is more power, strength, and speed-oriented—how many watts can you produce, whereas the trainer was more of a strength exercise. It’s much more load-bearing. The Erg is quicker and snappier, with quicker, more powerful motions.” There’s a place for both approaches in the open water swimmers’ training plan.

Create a circuit. Both Meyer and Fabian recommend creating a circuit program that combines strength, cardio, and core work to amp up the burn. And use it consistently as part of your overall training program. Meyer says one workout he likes to do involves both single and double arm pulling on the Trainer or SwimErg on a work-rest cycle that evolves throughout the season. During rest breaks, he mixes in some wall sprints, medicine ball throws, and core work to get various different systems working and burning in a compact and high-intensity workout.

Check Out This Vasa Circuit Training Workout From Coach Fabian!

Set your strap length. “On the Vasa Trainer, set the adjustable webbing strap length so that when you’re at the rest position, your arms are almost in the catch position,” Meyer says. “If the straps are super short and you’re holding on to the paddles,” gravity will move you down and your arms will end up “perfectly straight and your elbows will be hyperextended. That’s not what you want in a freestyle stroke. You want the humerus to be internally rotated to maintain that high elbow,” so play around with the straps until you find the perfect length for you and your stroke. This will also help spare wear-and-tear on some of the small shoulder muscles that aren’t strong enough to go from a fully weighted position. Start with more slack in the line to provide a bit more leverage for those smaller muscles to engage with less risk of injury. 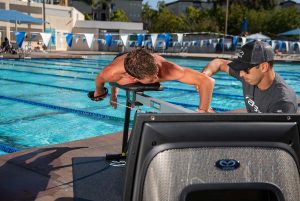 Keep the elbows high. Meyer says there’s often a temptation to “drop your elbow and pull on the rope as hard as you can like you do in a tug-of-war,” when using a Swim Trainer or SwimErg, but that’s not the movement you want to be reinforcing. Instead, focus on maintaining a high elbow to create more surface area with the arm to grab water. Learn good movement and focus on it while you train.

Reshape the recovery. If you’re new to the Vasa Trainer or SwimErg, it might seem like you should mimic your normal swimming stroke as closely as possible. While that’s true for the pull, Meyer says that the recovery is actually a little different. “I see a lot of people on the Erg trying to have this overhead, out-of-the-water recovery. I cringe when I see it because that’s tweaking your shoulder into a position it’ll never be in when you’re actually swimming,” because you can’t rotate your body on the Erg or Trainer. Without that rotation, you can injure your shoulder if you try to maintain overhead recovery. Instead, simply retrace the pull path backward. Avoid swinging out to the side or trying to recreate an overhead recovery. “You should be spending as little energy as possible on the recovery because you don’t need to train your arm to do a recovery,” Meyer says.

Mix up long and short. Fabian says that the SwimErg can help you train both your aerobic base and your strength and power skills. He recommends doing both short bursts for power and strength building, but also longer swims that can help build stamina and focus. Mix it up to keep it interesting and to work both your aerobic and anaerobic systems. 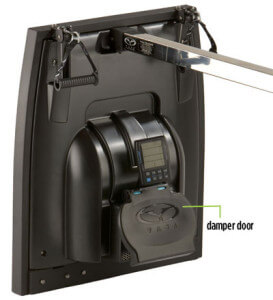 Use the damper door. On the SwimErg, there’s a damper door that can simulate the feel of swimming with or against a current depending on whether it’s open or closed. Fabian says you can play with that to change the resistance level to simulate different conditions. “That adds variety,” and gives you something else to focus on beyond just strokes and watts, he says.

Use your most powerful muscle—your brain. Meyer says that imagining himself on the Trainer or SwimErg when swimming in the pool or open water can help him bring back the technique focus he needs when he begins to fatigue. And this visualization can go both ways—let your imagination add open water scenery and the specter of tough competitors you’ll face in a coming race while you’re on the Trainer or SwimErg to keep you focused and pushing toward your goals.

Swim Coaching, Swimming, Triathlon, Triathlon Coaching
Comments are off for this post.
When Disaster Strikes, Vasa Indoor Trainers Might Save Your Open Water Race or Channel Swim For a hearty subset of swimmers, those who brave cold, rough water in pursuit of the far shore, a standard approach to long-distance swim training is to just keep swimming. When preparing for a swim of 20 miles or more, […]
22
Apr

Swim Coaching, Swimming, Triathlon, Triathlon Coaching, Triathletes, Triathlon swim training
Comments are off for this post.
Open Water Swim Training For Recreational Swimmers & Triathletes Each year, the number of people participating in open water swims and triathlons continues to grow significantly. As more of us embrace new, more adventurous challenges, many of us are getting wet well beyond the confines of the concrete tank with focused open water swim training […]
22
Mar

Swim Coaching, Swimming, Triathlon, Triathlon Coaching, General Fitness, Triathletes, Swimming workouts, Triathlon swim training, Masters swimming, Ironman swim training
Comments are off for this post.
Whether you are an experienced swimmer or an “adult-onset” swimmer, when it comes to open water swimming, everyone needs to practice the same skills to be fully-prepared for racing in the variable conditions of open water. Open water swimming requires a specialized set of physical and mental skills.  Those only come with specific open water […]
24
Jan

Shannon Coates: 3 Things That Have Made Me a Better Swimmer

Triathletes
Comments are off for this post.
Ironman World Champion Shannon Coates shares her 3 keys to becoming a better swimmer.