Who Wants to “Race” at the 2016 USA Swimming Olympic Trials?!

On the road to the Rio Games, Vasa’s next stop is Omaha, Nebraska for the upcoming USA Swimming Olympic Trials.  From June 30 through July 2, Vasa Swim Ergometers will be “the race venue” located at the ASCA exhibit area  in the Aqua Zone.

Fans will have the opportunity to “race a 50M Freestyle” on the Ergs.  Some might just get the chance to challenge former Olympians who love this event!


HOW?  Swim a 50M Freestyle on one of the 2 Vasa Swim Ergs in the AquaZone. Challenge a friend, an Olympian or race solo against the clock!

WHERE:  In the AquaZone at the ASCA exhibit area.

WHY?  Bragging rights for “racing” at Trials!  Plus, a chance to win a new Vasa Trainer, and other cool prizes, free tattoos, & decals.

Be sure to come by and check out the action, even if you don’t want to race. 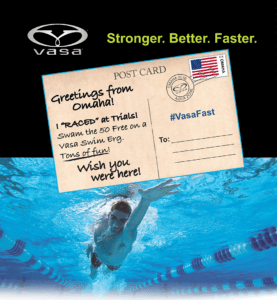 Discover how the world’s top coaches use Vasa products to prepare young swimmers for Olympic glory.   Also, be sure to look at the many educational offerings from the American Swim Coaches Association (ASCA) while you are there.

As the USA’s  top swimmers and triathletes gear up for the 2016 Summer Olympics in Rio, Vasa proudly supports their preparation by providing the world’s best swim training machines.  Since 1990, the Vasa Swim Ergometers and Vasa Trainers have been the training tools of choice for thousands of swim coaches, swimmers and triathletes worldwide, including many of those who will represent the U.S., Canada, Australia, Europe and many other countries in Rio in just a few short weeks. These swim-specific training machines help athletes get stronger, better, and faster.

Beginning at the 1996 Atlanta Games, Vasa Trainers and Swim Ergs, on request by coaches & athletes,  have been selected for several Olympic Games venues to equip the swim training centers in the Olympic villages.

“We’re once again thrilled to be a part of the Olympic Trials excitement.  This is our third time exhibiting at Trials – we were here in 2008, 2012, and now 2016.  It’s a true honor and privilege!” said Rob Sleamaker, founder, and president of Vasa. “It is very fulfilling seeing the athletes and coaches who have supported Vasa throughout the years succeed, and it’s humbling to realize that Vasa training products have played a role in their success.”