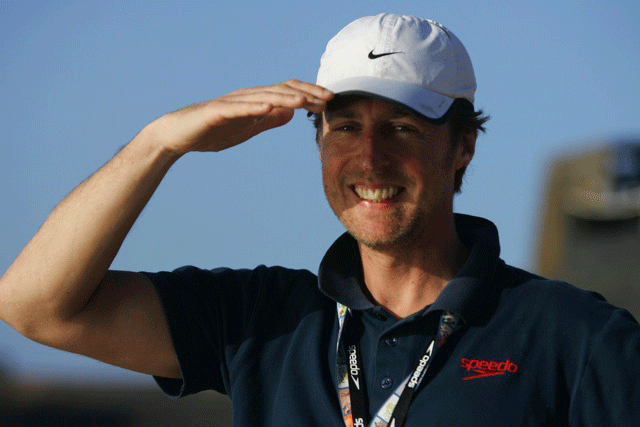 Q: Why do you coach swimming?

DB: I get to share years of training and knowledge of racing with swimmers that are keen to learn. I help people avoid making mistakes, having made them myself previously. Ultimately, I enjoy seeing people accomplish their swim goals, which is so rewarding since swimming can be incredibly hard to master. However, no one truly masters swimming. Regardless of age or speed, there is always something new evolving, a new drill or exercise to strengthen an area of your stroke. I find it fascinating.

Q: Where do you find your inspiration & motivation for coaching?

DB: There is nothing more amazing to me then to watch someone swim beautifully. To others who have a tear brought to their eye from a piece of beautiful music or an eloquent speech it is moving and powerful. For me it is the effortless grace and speed of someone swimming well, interacting with the water and working with it rather than working through it.

Q: What is the most important aspect of an efficient, fast freestyle technique? One thing.

DB: Streamline. I would say especially for long distance Freestyle (front crawl) stroke, which is what I teach primarily. Regardless of how strong or fit you are, you cannot beat your way through the water with power and fitness alone. Basic elements of propulsion are needed of course, but even limited propulsive moments will yield more reward when coupled with better streamline.

Q: What are 3 of the most common weaknesses you see in swimmers / triathletes and how do you help them make improvements to those?

DB: For adults who have not swum much as a youngster, the straight arm push down from the shoulder is a negative issue. This concept helps lift the head for breathing, but doesn’t help the swimmer go forwards and it strains the shoulder. Coupled with that stroke defect can be a stabilizing splayed kick, which stops novice swimmers from rolling onto their backs, but creates huge amounts of drag – and that drag slows the swimmer and wastes energy.

Q: Are there any specific tools & exercises that you rely on to correct these weaknesses?

DB: To help with corrections we use dryland leg movements help reduce the splayed kick. The hard part is limiting a big kick, so control is needed, not more strength or power. We use body position drills for an improved general streamline and lower controlled head movements for breathing. The central front-mount swimmer’s snorkel is of great use to take the head turn out of the equation. This allows more correct arm pulls, since the stabilizing effect of the arms for breathing has been taken away. The Vasa Trainer (and Vasa Swim Erg) though is still superior for introducing the catch concept on dryland, ahead of going into the water though. The easiest way to improve some of the above is to introduce an earlier catch position from the elbow and utilize the fingertip-to-elbow surface area to push water backwards, instead of downwards (which lifts the body, causing unwanted drag). As you swim faster, your body is higher in the water, and so the head turns less when breathing and uses the opposite pulling arm less for stabilizing.

Q: Why & How do you use the Vasa Swim Erg (and Vasa Trainer)?

DB:
• Technique & skill development – during workshops we take the easily mobile VASAs to the various pools we hire and make use of them during dryland periods between time in the pool. Time after time, swimmers new to the idea make the link between the correct movements so much easier at first on dryland. The “Eureka moments” for the athletes are countless.

• Training & consistent swim training – personally I have been making use of the Vasa Swim Erg for my own training as I prepare for our Masters Nationals over 3 & 5 km distance Open Water events. Building towards 90mins on the Swim Erg means 5km seems an easy distance to now race. It is easy to keep every stroke as symmetrical as possible, similar pathways, similar watts and stroke rate. I love the accuracy and of course, the continuity without flip turn interruption simulates Open Water.

• Performance testing – not yet but I hope to introduce soon.

Q: In what ways has the Vasa Swim Erg (or Vasa Trainer helped) transformed or enhanced your coaching?

DB: As a technical stepping-stone prior to hitting the water, we can look at many aspects of the stroke mechanics. We can correct some faults before entering the water, which complicates things due to the added issues of timing and breathing.

Q: What advice you would have for other coaches (and athletes) for ensuring they get best results from using the Vasa Swim Erg?

DB: The beauty of the Vasa Swim Erg is its simplicity and adjustability. I am no expert, but we have crafted Swim Erg workouts and routines for all abilities. Experiment and stay safe. Honestly, it is almost impossible to get it wrong. Pull in the wrong direction with the wrong musculature and the bench barely slides or the movement just feels wrong. Wrong pull on the Erg and power (watts) will be low. Feedback that would not be felt in the water is immediate and changes to technique come so much easier.

Q: In what ways has training on the Vasa Swim Erg (and Vasa Trainer helped) the athletes you coach (such as Vicky Gill, etc)?

DB: I feel we have accelerated the many 000’s of pulling movements that Pro Triathlete Vicky Gill needed to learn and push into the subconscious, as she literally learned to swim from zero just 4 years ago and became a sub-60min Ironman swimmer. Not needing to do the over-the-surface recovery (on the Swim Erg) I feel means we have done this safely and in a controlled, well-structured environment. Mostly this was done on the Vasa Trainer as technical movements to gain mechanical improvements. Now that we have transitioned to the Swim Erg, we are excited to work on her timing and rhythm of stroke rate.

Q: Describe any unexpected benefits and gains from using Vasa Swim Ergs and Vasa Trainers, including the athletes you coach and for yourself as a swimmer.

DB: I can watch movies on a laptop underneath it 🙂
Seriously, we do rehab, prehab, stomach exercises, and a precarious plank position with toes on the bench holding it off the base. The list is endless as your creativity allows. 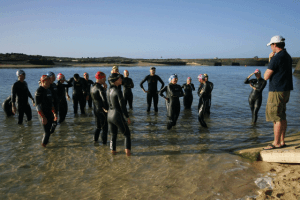 Q: Triathlon open water swims can be daunting. How does consistent training with the Vasa Swim Erg increase confidence in the athletes you coach?

DB: If your technique is good and not something you need to think about with every stroke, then you now free up ‘bandwidth’ to focus on things like navigation, race tactics, determining if a draft off someone is of use or hindering me? Asking if I am on the best line or what is my rate of effort? Do I want to speed up or slow down? If you can absorb the race and be in it rather than stitching together swim movements to create Freestyle every stroke, then confidence builds. It is like driving a car. Early on, you are nervous as you are absorbed in the controls rather than focusing on road conditions. Once familiar with the controls and locations, driving safely becomes easier. The Swim Erg allows for more repeated accurate movements to put the technique into the subconscious sooner, allowing you to race rather than struggle.

Q: Everything we’ve ever wanted is on the other side of fear. How do people deal with that fear and transform it into action?

DB: There is nothing more fearful for a novice than approaching Open Water for the first time in the crowded frantic environment of a triathlon or OW race, especially if it is a deep water start with athletes packed in tightly. I have seen strong swimmers panic and not enjoy OW at their first attempt. To me, being successful at OW swimming is about controlling, and being in control of, as many aspects as possible. Then, when some ‘issues’ crop up that are out of your control, they do not phase you. Goggles should have been investigated through the year and not still be an experiment, hoping they do not leak on race day. Confidence you can race the distance without stopping, without touching a wall or spending extra time & energy… are all possible from training on the Vasa Swim Erg, and all the while good technique is being reinforced.

Q: What is the most efficient and powerful way to integrate the Vasa Swim Erg with in-water training?

When we had an endless pool, the combination of technique work on dryland with the Vasa Trainer, followed by work in the water, was amazing. Since then, we mostly use the Swim Erg at weekend workshops where we are pretty quick at getting into and out of the water. As mentioned, complex movements become easier once performed firstly on dryland without the issues of breathing and timing.

Dan Bullock ASCA, BTF, ASA Swim Coach
Dan has been coaching since 1990. He is a keen Swimmer, former Triathlete and now Open Water swimmer and Coach. He has helped thousands get fit and fast for adventures from their first novice Triathlon to swimming the English Channel. Dan’s athletic accolades include being National Masters Champion (2008 to the present), a British AG Record Holder (800m), European Masters Medalist and has completed several Ironman competitions. Most recently, he won his age group at the ASA Open Water National Championships 2015 Masters for the 3K, finishing 4th place overall.”
Check out Dan’s website for more information on swim training, coaching & more.

Masters swimming, Triathlon, Ironman swim training, Triathlon Coaching, Triathletes, Swim Coaching, Swimming, Triathlon swim training
Comments are off for this post.
Part 2: How I justified my decision to get a Vasa Trainer Pro to my spouse! (This article is hypothetical and based on stories from many “Jack & Jill Vasa athletes.) As described in Part 1 of this series, I have loved swimming since starting summer swim league at age six and have been competitive […]
1
Aug

Swimming workouts, Triathlon swim training, Masters swimming, Ironman swim training, Triathlon, Triathlon Coaching, Swim Coaching, Swimming, Triathletes
Comments are off for this post.
A common limiter for many swimmers is the tendency to maintain the exact same hand speed through the entire stroke.  This is especially noticeable in those who began swimming as an adult. Top masters swimming coach Eric Neilsen initially brought this concept to our attention. He refers to this limiter as swimming with a “monospeed” […]