This blog entry represents the time period between 1/3/13 and 2/18/13 in the training log of David Nijhawan. 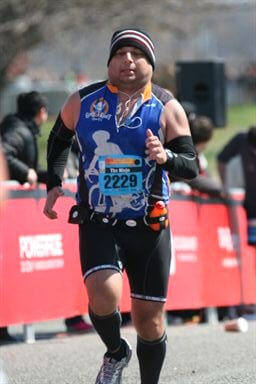 I am an average Joe.

I am an average Joe. Nothing more, nothing less. I maintain a rigorous work schedule, drink beer, eat pizza, love my Philly cheese steak, and depending on the day, relish in terrible Chinese food. That said, in full disclosure, Vasa, Inc. is, and remains, my favorite client of all time. I was Vasa’s business banking officer when I lived in Burlington, Vermont. I have since left Vermont, but Vasa’s impact on my fitness, notwithstanding dietary habits, revolutionized my swim and triathlon training.

If I wanted an edge, I needed an X-factor.

Let’s take a step back. I took a trip to San Diego California at the end of 2012 to visit a girl, but more importantly, to train with her as we both planned on racing Ironman 70.3 Oceanside in March of 2013 as well as Ironman Cozumel in November of 2013. I swam regularly with the Burlington, Vermont masters swim program during the fall of 2012 and felt good about my swimming. However, on a cold, day-after-Christmas swim, I struggled to keep up in the middle of the pack in the rough waters of La Jolla cove. I knew at that moment, if I wanted an edge, I needed an X-factor, something that would force me to perfect my form and stroke so that the same didn’t occur three months later.

I fit my Vasa workouts in whenever I could.

I fit my Vasa workouts in whenever I could. This usually resulted in only two sessions per week, easily under 20 minutes each. Like I alluded to above, I have a regular job, two dogs, and based on the food selection I described, I like to party. That said, when pushed hard in a group, I can keep a 1:45 or so pace on the 100 without killing myself. Now, I will reveal this: On my first trip to San Diego, I did get “chicked,” meaning, a girl passed me. I know, I know…it’s juvenile, but at least I’m honest. To make sure that wouldn’t happen again, I basically followed some of the “canned” workouts presented in the Vasa manual and stuck with that.

I outweigh all of my friends by nearly 70 lbs. I smoked them.

Fast forward six weeks and I found myself at the Mission Valley YMCA masters class in San Diego with my friends. In their eyes, I was an idiot. In my eyes, I was a risk taker. Keep in mind, I promised myself to never actually swim unless it was a time trial. This was no exception. In sum, the Vasa Trainer forced me to perfect two things: 1) early vertical forearm, and 2) high elbow catch. I outweigh all of my friends by nearly 70 pounds. I smoked them. In my times, I consistently brought my 100’s down to around 1:21. This result is atypical; however, it proves unequivocally that the Vasa Trainer works. Moreover, it forces the swimmer to “swim” with perfect form.

In all honesty, I don’t have time to swim much anymore, but I do have time to work on my Vasa Trainer. I do jump in the pool from time to time just to envelop myself in my chlorine dreams, but when push comes to shove, Vasa does the trick. Perhaps you should try it, too.

E-mail me with questions: [email protected]

The Unstoppable Paralympian on Overcoming Adversity

Triathlon Coaching, Interview, Triathletes, Ironman swim training, Triathlon
Comments are off for this post.
Vasa Exclusive Interview: The Unstoppable Paralympian – Part 2 Vasa had the privilege of interviewing Elite Paratriathlete and Sports Psychologist Chris Hammer, Ph.D. He recently became the first challenged athlete in history to earn his USA Triathlon elite license, allowing him to compete in professional fields against the elite able-bodied competition.  Chris is preparing for […]
3
Oct

Swimming, General Fitness, Triathlon swim training, Masters swimming
Comments are off for this post.
(Or..how I justified my decision to get a Vasa Trainer Pro to my spouse!) (Note: this article is hypothetically based on many stories submitted by Vasa “Joe Athlete” customers.) I like swimming. A lot. Always have since starting summer swim league at age 6.  At the pool, in the ocean, at a lake… it doesn’t […]