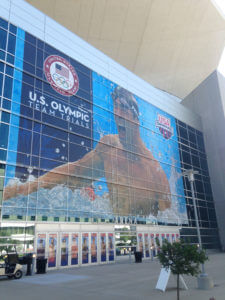 It’s July 1 and I am standing at the Vasa booth in the AquaZone at the 2016 USA Swimming Olympic Trials.  There’s a long line of swimmers & parents waiting their turn to challenge themselves at our activity.  A swimmer’s Dad and I are chatting and he asks, “is this your first Olympic Trials?”

I say, “It is our good fortune this is our third time on display at USA Swimming Olympic Trials – we were here in 2008, 2012, and now in 2016.  Each Trials has been an amazing, exciting and fulfilling experience that just keeps getting better, thanks to USA Swimming.  They sure know how to put on a world-class event!”

The Dad smiles in agreement.  It’s now his turn to race his daughter on the 2 Vasa SwimErgs set up in our interactive display.  Off he goes and before long, the expression on his face turns from smile to fierce competitor.

However, his inquiry had me considering a few questions of my own, such as:

Why were we at USA Swimming Olympic Trials again this year?

My answer has something to do with Luck.  By definition, Luck is when Opportunity meets Preparedness. For the last 3 Olympic Trials, USA Swimming has graciously invited outstanding non-profit organizations to participate in the AquaZone, granting them a modest space in which to create a fun, interesting, and interactive display for fans to enjoy.  Those include class-act do-good organizations such as US Masters Swimming,  the American Swim Coaches Association (ASCA), among others.

Since Vasa has been an ASCA sponsor for many years, we have been fortunate to be included in their interactive area.  Many thanks and credit go to ASCA Executive Director, John Leonard.

In 2012, Mutual of Omaha created the “Swimulator” event using 4 Vasa SwimErgs for fans to “race” on.  That was truly an exciting event pulling in well over 1,000 fans.

Swimmers love racing, so this year we produced the “I raced at Olympic Trials” event – which involved doing a 50-meter Freestyle for time on the Vasa SwimErgs.  Fans could race each other head to head for bragging rights, good natured fun … and a chance to WIN a new Vasa Trainer (see details at the bottom of the page). 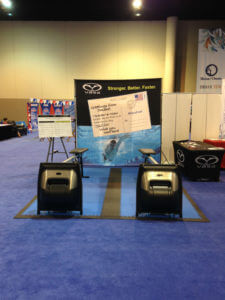 It was a huge success! 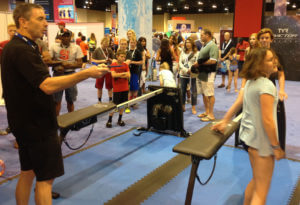 Waiting in line to do the Vasa 50M Challenge

Over the course of three days in the AquaZone, thousands of fans visited us and over 750 brave swimmers raced a 50M Free on Vasa SwimErgs!  On completion of their “race”, each racer received a souvenir “finisher” card with their official time, decals & temporary tattoos, plus got to take a “picture postcard” while wearing a Gold or Silver medal.  Family Holiday cards will be extra special this year!

Swimmers of all ages raced on the SwimErgs including brothers, sisters, moms & daughters, dads & sons, even swimmers racing at the Trials. Much to our delight, Olympic legends Lenny Krayzelburg
and Dr. Ron Karnaugh brought their daughters over to race too! 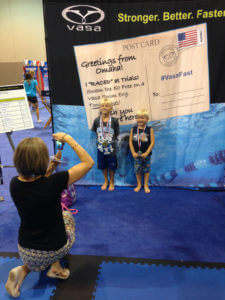 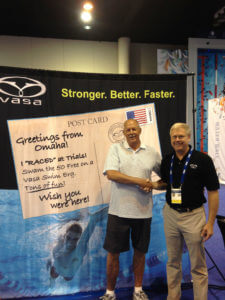 Tom Blackburne set his age-group record for 50M on the Vasa Swim Erg at Trials.  He told me: “It was a distinct pleasure to meet you. Having owned a Vasa Trainer for over 24 years, I am in admiration of you and your company. Your Trainer is a large reason why I became an accomplished swimmer.  I would strongly recommend it to anyone who desires to have a competitive edge in our sport. Hope our paths cross again.”

As an added bonus, ASCA gave us tickets for the prelims and Finals at Trials.  Each night, we were treated to front row box seats behind Lanes 3 & 4.  The action was up close and personal,  the entire event epic and historic.  We will always remember witnessing Michael Phelps win his events, cheering Molly Hannis (a longtime Vasa Trainer user) of Tennessee as she came from behind to punch her ticket to Rio, seeing my dear friend, legendary coach Richard Shoulberg on deck and presenting the Open Water medals… the list goes on and on.

Once again, it was an honor and a privilege to be part of the excitement with all the fans, the athletes, the coaches and the commentators. 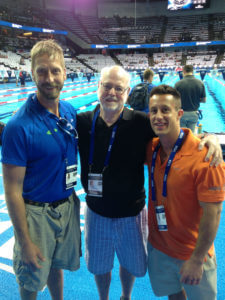 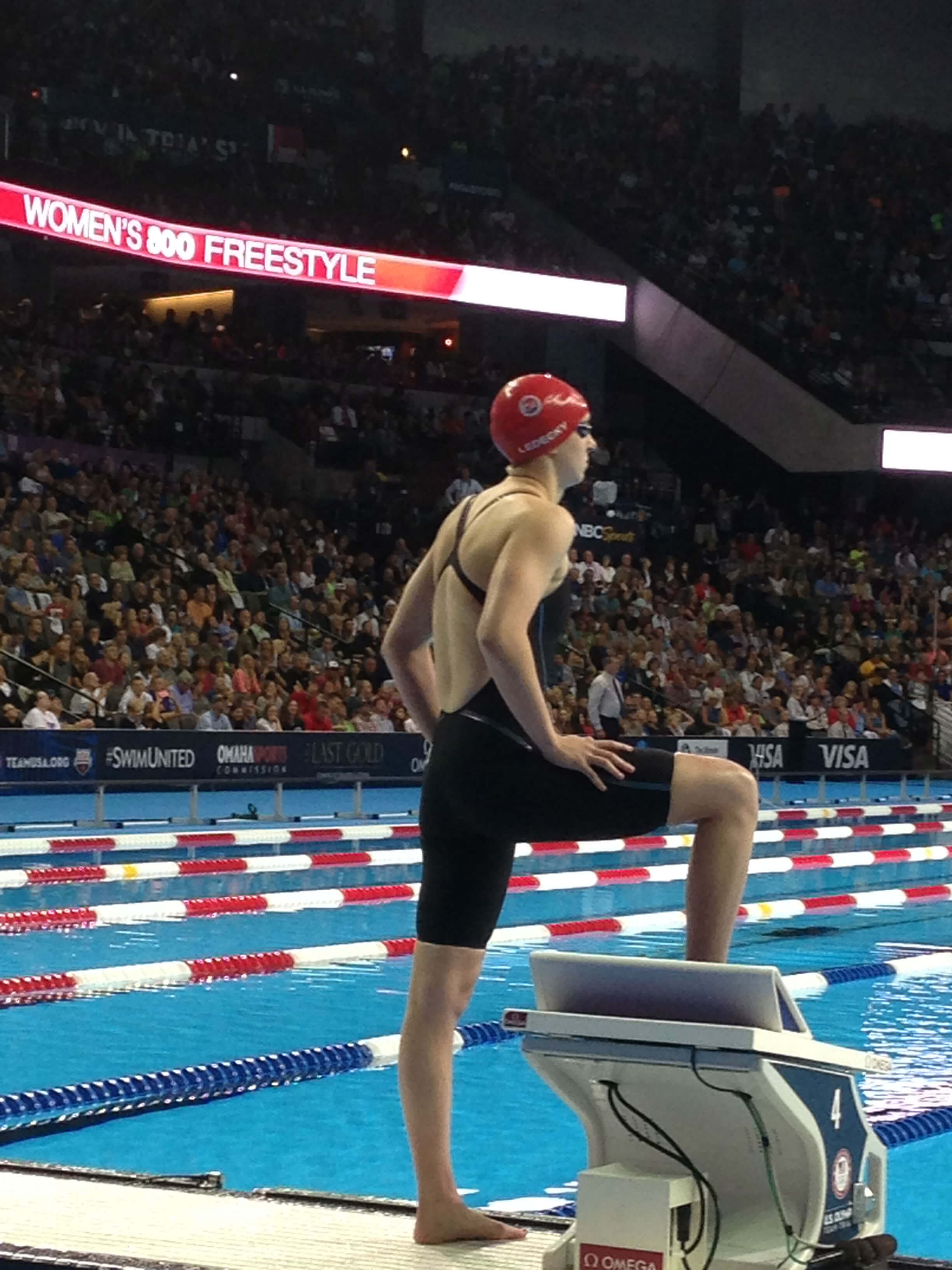 How did Vasa become so highly regarded in competitive swimming?

At Trials this year, I was reminded just how many swimmers and coaches already knew about Vasa. What a thrill it was for me to meet Tom and to hear about his great story and his high regard for Vasa.

Our involvement in swimming began in earnest in when we introduced the Vasa Trainer to swim coaches at the 1990 ASCA World Clinic. The Vasa Trainer originated when I observed swimmers & triathletes needed a better way to improve specific strength & power.  So I wanted to find out if swim coaches had the same needs.  My ideas were confirmed at that ASCA clinic when 3 legendary Olympic swim coaches (Richard Quick (r.i.p.), Richard Shoulberg of Germantown Academy and Nort Thornton from Cal-Berkeley) came over to our booth together.  They tried out the Vasa Trainer and started getting excited.  One of them said to me: “Where have you been? We’ve been looking for something like this for 10 years!”  The funny part of this story is that I had no idea who these coaches were!  Later that day, I saw their pictures & profiles in the clinic speakers program.  It was then I realized the full impact of what had happened.  They truly “discovered” Vasa and the rest is history.

As a result, Vasa got an explosive start as we jumped off the blocks into competitive swimming.  Ever since, our products have been in demand by swim coaches, swimmers, triathletes, PT’s and trainers worldwide.  Our involvement has led us to develop more innovations, such as the Vasa SwimErg described above.

Starting with the 1996 Atlanta Games and at every Games continuing to the present, Olympic venues have equipped their athlete training areas with Vasa Trainers and SwimErgs…most often at the request of coaches and athletes.  Of course, these same coaches and athletes use Vasa equipment on their home turf.

It’s truly a special privilege to be part of this movement that is the pinnacle of years of diligent training progression and excellence for the thousands of athletes and coaches who aspire to be stronger, better & faster.

Why do thousands of fans come to Trials and what does all this mean for the Olympians & USA Olympic Swimming?

This is a question I have pondered for some time.  After returning from the 2016 Trials, I had a wonderful discussion about it with my friend and colleague, Joe Jacobi (Olympic Gold Medalist in Whitewater Slalom Canoe, 1992). Thanks to Joe’s wisdom, experience, and perspective, the answers became clearer.

Joe reminded me that the Olympics are meant to be shared and celebrated by all those involved – especially by the millions of fans – families, friends, volunteers, and coaches who have supported the athletes along their path to success.   The expression “it takes a village” applies to the back story of every Olympian.  It takes many people working in a broad-based collaborative effort to support every athlete, every team, and every coach from every country, to reach the Olympic Games, where they will strive to perform at their very best.

The thousands of fans who attended the USA Swimming Trials in Omaha this year clearly had spent their collective time, energy and money in support of the Olympic swimming movement – the athletes, coaches, the teams & clubs, the officials & administrators, the sponsors & suppliers had all benefited from the fan base support.  The dedicated fans who participated in the exciting activities of the AquaZone at Trials, and the fans who cheered their favorite swimmers each night at Finals, were and always will be, part of the essential “village” it takes to raise athletes up to make an Olympic dream come true.

In swimming, every stroke counts.  In this case, every fan, parent, aspiring young swimmer, coach, official, and volunteer involved in our sport COUNTS.  They count more than words could ever express. Now the Rio Olympics are underway, and I feel incredibly fortunate and grateful that our Preparedness has met with Opportunity so we can support the success of our swimmers and coaches.  I’ll take that kind of Luck any day of the week! 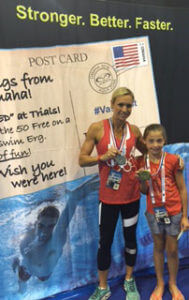 Everyone who raced on the SwimErgs at Trials was entered our drawing to win a brand new Vasa Trainer.

JEN SIEVE of Kansas City, was randomly selected from over 750 entries as the winner. Congratulations, Jen!!

Safe & Happy: How to Set Your Own Swimming Record

Swimming, Swim Coaching, Masters swimming, General Fitness
Comments are off for this post.
Powerful wisdom from a Masters Swimming World Record-holder to help you swim stronger, better, and longer. Author: Jerry Frentsos I have a simple goal with a simple solution.  Set a Masters swimming world record at age 105. I have set 21 World records in Masters Swimming over the last four decades within six different age […]
3
Jan

Swimming, Swim Coaching, Masters swimming, Swimming workouts, Triathlon, Triathlon Coaching, Triathlon swim training, General Fitness
Comments are off for this post.
Author: Tim Crowley It is widely accepted that core training is essential to swimming performance and efficiency. In most sports, athletes have their feet anchored on the ground, making power transfer from the ground up easy to train. In contrast, the swimmer is in a fluid medium where the core controls and coordinates movements from […]
14
Dec

How a Champion Swimmer Optimizes Time for Better Results

Swimming, Swim Coaching, Masters swimming, Swimming workouts, Triathlon, Triathlon Coaching, Triathlon swim training, Ironman swim training, General Fitness
Comments are off for this post.
•Author: Jerry Frentsos Time. What does it mean to you?   Depending on the person, it’s a word with various definitions and connotations. So let’s take a look at what the dictionary has to say about time. Time, noun, the indefinite progression of existence and events from the past to the present into the future, is […]
30
Nov

Swimming, Swim Coaching, Swimming workouts, Triathlon, Triathlon Coaching
Comments are off for this post.
Author: Tim Crowley When triathletes and open water swimmers think of Vasa, for many, it’s the Vasa SwimErg product that comes to mind. In 1990, Rob Sleamaker invented the Vasa Trainer Pro model and unveiled it to swimming coaches at the ASCA World Clinic.  It quickly became a “must-have” training tool for swim coaches worldwide.  […]