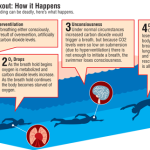 July 14th, 2011. 21-year-olds Bohdan Vitenko and Jonathan Proce of Staten Island were eager to join the armed forces. In preparation for their
October 27th, 2012. 14-year-old Louis Lowenthal of the North Baltimore Aquatic Club decided to remain in the pool after the NBAC team workout had ended to practice on his own. A dedicated competitive swimmer, Louis proceeded through his self-supervised workout with a variety of different drills. At one point, he began 50 meter breath-holding sets under water. Within minutes of his 50 meter attempts, Louis was dragged unconscious from the pool. Three days later, he died.upcoming military training, the two young men met at their local swimming pool to practice breath-holding exercises. Hours later, Vitenko and Proce were found unconscious by lifeguards in a far corner of the pool. Despite CPR and hospital treatment, both of the men died.

January 29th, 2013. 12-year-old Jack MacMillan of Australia was testing his limits a few feet away from his mother in their backyard swimming pool. A competitive swimmer, Jack was swimming laps for as long as he could without taking a breath. Jack’s mother, who had turned her head away for a minute to tend to her daughter, looked back to find that Jack was unconscious at the shallow end of the pool, less than one meter deep. Minutes later, despite CPR administration, Jack was dead.

Awareness of blackout incidents in competitive or recreational swimming settings has existed for many years. Legendary Germantown Academy swimming coach Richard Shoulberg recalls his brush with death as a high school senior in the local YMCA pool: “At the time, breaststrokers were allowed to swim their races entirely underwater. I was practicing this technique on my own one day, attempting to swim 100 yards without surfacing for air. I didn’t realize anything was wrong until, next thing I knew, I was being pulled off the bottom of the pool. I had passed out before I could resurface for air.” Although Coach Shoulberg was lucky to have been rescued in time, others were not. After a swimmer drowned in Connecticut in 1958 while swimming breaststroke underwater, FINA changed the rules, requiring swimmers’ heads to surface after each stroke cycle.These are just a few of the many stories that coaches, swimmers and parents have shared about their experience with sudden – and potentially fatal – loss of consciousness in the water due to prolonged, repetitive breath holding and, in many cases, preceding hyperventilation. These breath holding-related “blackouts” – increasingly known as “shallow water blackouts” – can occur to swimmers of all ages and levels of fitness, and in competitive swimming settings, the trigger usually includes extensive hypoxic training, either with or without supervision. 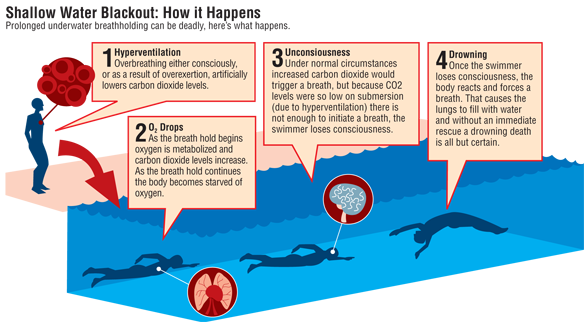 Despite this, the causes, level of risk and terminology used to describe swimming-specific blackout incidents remain misunderstood or overlooked to this day.Because it is difficult to identify whether a death occurred due to a hyperventilation-induced or hypoxic blackout without eyewitness information as to the victim’s preceding activities, the statistics remain unclear. Many deaths by drowning simply remain unexplained, thus turning attention away from the potential root cause. As a result, the practice of extensive breath holding remains widespread despite the risks, whether amongst competitive swimming teams, free divers practicing for their next open water trip, or even recreational swimmers testing their limits underwater without surfacing for air.

Education and awareness are the first steps towards prevention, and we hope to provide you with a more comprehensive discussion on the occurrence known as shallow water blackout – what it is, how it happens, and what steps can be taken to prevent it from occurring. Stay tuned for our next segment on the facts about shallow water blackout.