Better Surf Training For Maximum Results At Any Age

“My mom once asked me, ‘Rick, when are you gonna give up surfing? My response was, ‘When they pry the surfboard out of my cold, dead fingers,’” recounts Dr. Richard Rhodes, both a scientist and longtime surfer who, at 67 years of age, is still surfing big waves, paddling an outrigger canoe competitively and conducting studies on climate change and coastal erosion between surf training workouts. 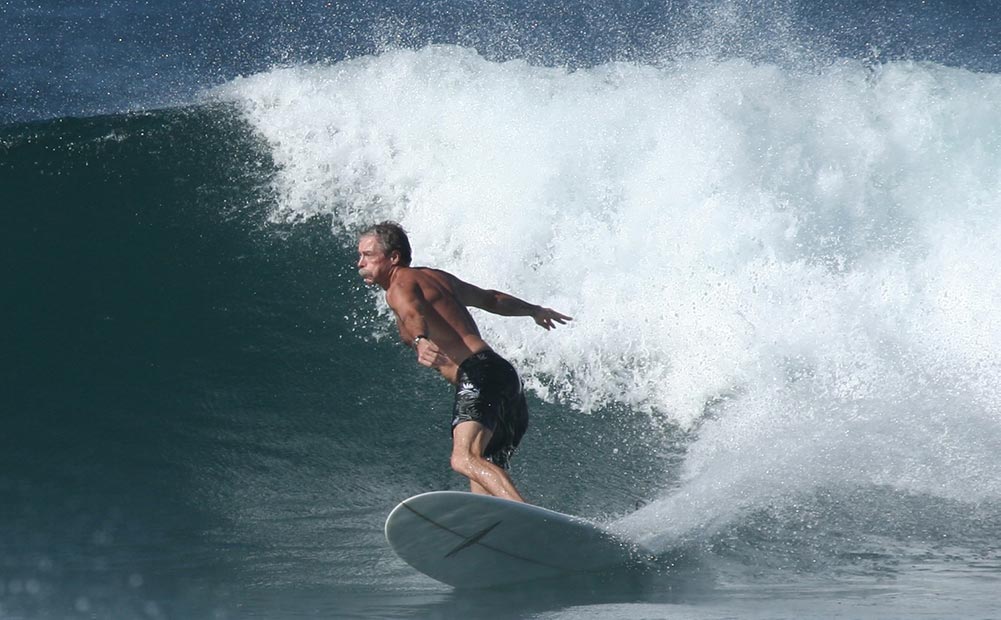 Rhodes credits his longevity in the sport to training consistently and to constantly challenging himself, which he predicts will keep him surfing for the rest of his life. Rhodes grew up surfing summer waves in Southern New Jersey, where his parents rented a house. He went inland briefly to obtain his undergrad and advanced collegiate degrees and then rediscovered the coast at age 30 when he joined the faculty at the University of Rhode Island, moving a mere five miles from the Atlantic Coast.

His time in and around the water have proven time and time again that the ocean is unpredictable and the surfing can be feast or famine. “When there is a swell, lawns go unmowed and you surf your heart out until the swell is done. In fall hurricane season, five or six good swells could last up to seven days a pop, and you’re in the water every day for a week, but the rest of the time you need to be training so you’re ready when the waves come (back).”

For Rhodes, Vasa SwimErg dryland workouts are an important part of his surf training regimen. “Getting out of shape is what chases people out of the water. If you can’t paddle strongly enough to catch a wave, or you can’t get to your feet fast enough to ride it, people hang up their surfboards, discouraged.”

To avoid fatigue and ensure he’ll be powerful enough to catch the next wave, Rhodes religiously follows four cardinal rules to surf training success: consistency, efficiency, variation, and planning. Rick relies on his Vasa SwimErg to achieve a total-body and surf-specific fitness so he can be ready to go anytime, anywhere.

Rhodes describes his surf training workout time as sacrosanct. “I give myself two-and-a-half hours a day dedicated to working out; an hour at noon, and an hour & a half in the evening,” said Rhodes. “If I can get two workouts in per day I am a happy camper. But I know I can’t lay the hammer down 24/7, 365 days a year, or I will get hurt, sick or both, like I did when I was a marathon and road racer a decade ago.” 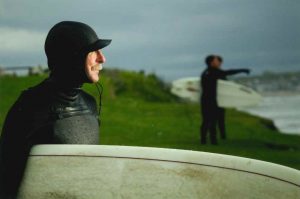 As a runner, Rhodes went through multiple knee surgeries. “The orthopedist suggested cross-training, and thanks to his advice, I am in better shape now than at my top level of fitness as a marathoner,” said Rhodes.

Rhodes success with cross-training is impressive. Since he started 15 years ago, he says he hasn’t been sick or injured. “I had my annual physical a week ago, and the doc told me my resting heart rate is 42, which he says he doesn’t see in patients 30 years younger,” recounted Rhodes. “For me, cross-training has reduced injury and the ignominious cycle of pain I was in as a runner. It’s easy for an athlete to fall into doing one activity. But you have to mix hard weeks with easier weeks and vary what you’re doing. It not only leads to physical success, but it takes off the psychological burden of always being sore and dreading the coming week’s training.”

Rhodes likes training on his Vasa SwimErg because it is more time-efficient for a surfer with a day job, which is how he describes himself. He also chooses the Vasa SwimErg because it gives him measurable workout metrics, such as time, distance and power (watts). “There is no coasting on the Vasa,” said Rhodes. “You pull or you don’t pull.”  The power meter and sound of the air fan “whooshing” as you swim or paddle with resistance is useful biofeedback and lets users find their strengths and weaknesses.

For Rhodes, a SwimErg is an all-around workout machine. “I swim on it, I knee paddle, and I reverse position and rather than paddling with my head towards the wind trainer, I flip,” described Rhodes. “That gives my muscles a completely different workout, and it’s really hard. Variation prevents workouts from being stale and boring. On the Vasa, it never feels like I’m doing the same five-mile run at an eight-minute pace.

Note: Check out the shoulder strengthening workout at the end of this blog post for a great example of training variations for the Vasa SwimErg!

Rhodes trains all muscle systems on his Vasa, whether he is swimming prone, knee paddling, laying on his back, or working on his recovery stroke strength (see video below). The SwimErg helps him build strength, stamina, core strength and balance. It also helps improve cardio-pulmonary capacity, which is a key piece of training for surfers. Rhodes says that most surfers don’t give that aspect enough attention. “Anyone who has been in big waves has been held down and pinned underwater for a lot longer than you want to be,” said Rhodes. “It’s frightening. You can’t move, your surfboard is tombstoning above you perpendicular to the water and attached to your foot. Big lung capacity helps you control the panic until you’re released.”

Rhodes says he sees a lot of people training without a plan or program. They feel good today so they paddle hard for an hour, and when they don’t feel as good tomorrow, they back off. Rhodes observes that having planned workouts really helps to accomplish goals. “The beauty of the Vasa is you know exactly what you’re doing, you know how hard you’re pulling and whether you should be pulling harder. You have the power meter readout that tells you whether you’re training hard enough, or if you’re slacking off.” 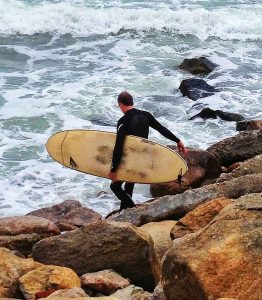 For Rhodes, long-term planning is a must. “Success doesn’t come in a day, week or year,” says Rhodes. “You need to grow and develop your knowledge of the ocean, which fits part and parcel with the stamina piece. On a big day, you need to figure out a plan of attack, to know how you get in and out without taking a severe beating, and then you need to have the stamina to execute. Having fitness lets you focus on timing, coordinating your paddling speed with the speed and direction of a wave, stroking with the pitching part of the wave.”

Timing Your Wave
Rhodes also works hard on his timing, which he describes as one of the hardest aspects of surfing.  Using his Vasa SwimErg, he can practice stroke cadence and pulling strength to simulate the natural movement of waves. “When I am working out, I am imagining myself in the lineup and scrambling to catch a wave,” said Rhodes. “There are subtle moves you can make on a Vasa that you also make on a surfboard. I look in the direction I expect the wave to be breaking while visualizing catching the wave as I stroke. I can’t think of another dryland training device that allows you to do anything like that. It’s as close to swimming and paddling as you can get without being wet.”

Durability & Surfing Stamina
Sprinting and pyramid workouts help Rhodes build stamina to withstand the beating the ocean sometimes dishes out. He points to one of his favorite Vasa workouts that he calls “30-20-10s.” After a 10 minute warmup, Rhodes does thirty repeat intervals of  “30-20-10s”. The first 30-seconds are done at 50% effort, which is similar to paddling out to a break. The next 20-seconds is done at 70% effort, paddling as if he is trying to reach a wave in anticipation of catching it. Then for the last 10-seconds of the interval, pull very hard, as if powering to catch a wave. “I’ve set a goal of catching 30 waves in a given session—you would never do that in one session on the water, but it gives me time on task as if I’m doing the sport I love,” said Rhodes. He follows up his Vasa workout with free weights and a P90X follow-along functional fitness workout for his second workout session. 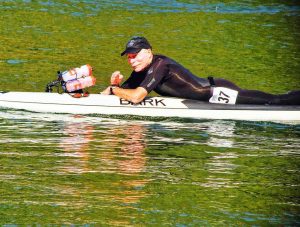 He does the Intervals at race pace, and the 1-minute rest paddling at an easy pace.  He follows that Interval sequence with ten sprints that are three minutes each with a minute rest.

Results Don’t Lie – Catching the Ride of His Lifetime

Two years ago Rhodes was surfing Hawaii’s North Shore, the epicenter of global surfing. He was surfing a seven-mile stretch of beach known for its world-famous name breaks.

“The buoy markers were showing (waves) in excess of 20 feet,” said Rhodes. “I paddled out to a break. It was big. You could see guys doing tow ins on the outer reefs, and I knew it was just getting bigger. I looked at an outside indicator break and started to stroke for the horizon. Then the (wave) set from Tibet came in. I got over the first wave, which took everyone else out. As the second wave was cresting, I caught it. When waves are that big and powerful they kind of surf you.”

It was the ride of a lifetime. “When I got out,” Rhodes recalled, “people who were lining the beach watching me reached out for high fives. I was watching other surfers when a tour guide tapped me on the shoulder to ask if his Philippine tourists could get their picture taken with me.”

Rhodes shrugged it off. “I was like, ‘dude, look around there are tons of young people here with sleeve tattoos and long flowing hair. Your group should get their picture taken with them.’ But they wanted their picture with me. I was stunned. I had never experienced anything like that before. The only reason I could catch that wave was that I have taken a lot of time to be in shape to get to that wave and to hang on.”

Rhodes is stoked and feeling unstoppable. He’s currently training for outrigger races from 14-31 miles and using the Vasa SwimErg to meet his goals.

“Growing up, I wanted to be that guy that chased waves around the world, and thanks to my job I’ve been able to surf and paddle in Hawaii, Central America, Africa, as well as New Jersey and Rhode Island. The Vasa SwimErg is helping me continue to catch waves, and live the dream.”

Check out this great workout to improve shoulder strength.

Surfing
Comments are off for this post.
At-Home Workouts For Landlocked Surfers Surfers, once loath to do anything other than surfing for conditioning, are now embracing dryland training for surfers. Why? A fitter surfer catches more waves — it’s as simple as that. The sport has evolved to a new level of competitiveness, both at the elite level and on increasingly crowded […]