Overcoming Freestyle “Monospeed”: Why, How and When to Accelerate Hand Speed

Many athletes, especially adult-onset swimmers, have a tendency to maintain the exact same hand speed from entry to finish of the stroke.

Coach Eric Neilsen appropriately refers to this as “monospeed.”

Monospeed can become more pronounced at the onset of fatigue, but its presence can hinder performance at any time during the stroke.

It’s essential that swimmers find a way to overcome it. Here’s what to know. 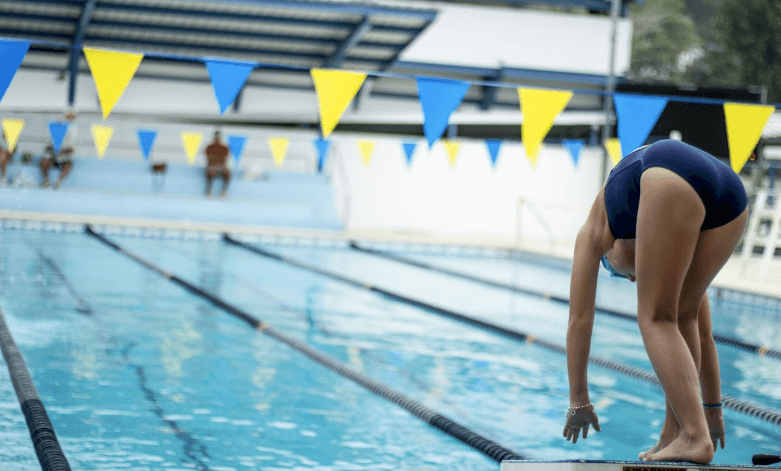 What is “Monospeed” and Why Does it Matter?

Unfortunately, monospeed can affect any swimmer at any level.

Somewhere along the way, those swimmers never learned how to apply force to their stroke from the catch to finish, so they just continue using a monospeed stroke.

To understand why it happens, you have to understand the concept of accelerating hand speed.

When you look at the three phases of each stroke — entry, catch and finish — you can see how varying speeds impact performance.

When your “blade” enters the water, it is counterproductive to push the extended hand and arm down a lot of force. This action would simply lift the swimmer up and force the legs down, thus creating unnecessary frontal drag.

So, it’s best to avoid applying much pressure on the water in the very beginning phase of the stroke right after entry. (This video on “How to keep your legs from sinking” shows why it is important to learn this technique element.)

Instead, it is best to quickly get the “blade” into a high elbow catch position without pressing down on the water with much force.

Many top swim coaches recommend visualizing “reaching the hand and arm over a barrel or small physioball” to get it into the high elbow catch position. 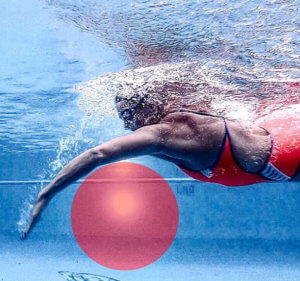 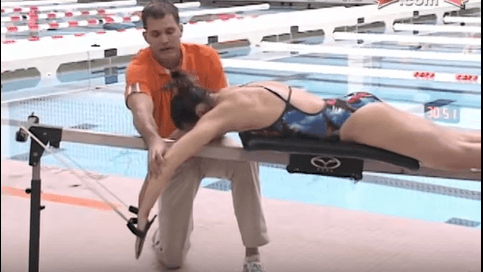 Once the “blade” reaches “the high elbow catch” position and is set up to pull with power, many athletes unknowingly continue to pull using the same slow hand speed and force they used to go from the Entry to the Catch.

That is what coach Eric Neilsen calls a “monospeed” stroke.

Lack of hand speed acceleration during the catch to finish part of the stroke will limit force production by the large “pulling” muscles of the back and lats, even if the swimmer has an excellent high elbow catch and a smooth swimming technique.

It’s important to note the timing of the pull in Freestyle must be connected with a slight rotation (drive the opposite hip toward the bottom) and core stabilization.

If pulling with force and the legs tend to “fishtail” side to side, it’s a sign the core stabilizers are weak or not activated. (Learn more about proper rotation in Freestyle in this video.)

If the “blade” pushes up on the water with too much effort at the end of each stroke, then the body will be forced slightly down in the water, thereby creating undulation and more drag.

This will slow the swimmer and possibly create other compensations, such as splayed legs or “fishtail” legs.

It’s better to push straight back without flicking the wrist or pushing up on the water at the finish of your stroke.

This video of Australian champion swimmer Grant Hackett shows how well he “grips and rips” the water with acceleration from catch to finish, demonstrating what varying hand speed should look like when performed correctly.

If you’re not sure whether or not you vary your hand speed, you can easily find out by using a tool like the Vasa SwimErg.

One key benefit of using the Vasa SwimErg is the ability to consistently position the arm to see, achieve and maintain a high elbow catch without crossing midline.

Then, using visual and audible cues from the SwimErg’s framework and spinning fan wheel, the athlete can apply force and acceleration from catch to finish, while simultaneously connecting the large muscles of the lats, back, and torso with each stroke to generate more pulling power. 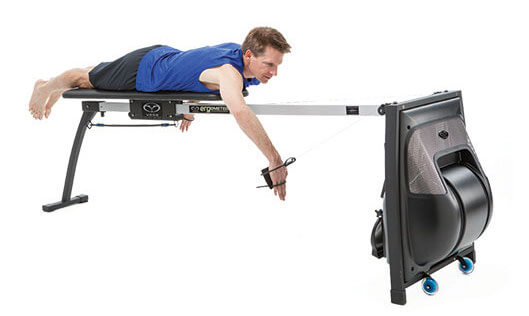 Many coaches report using a Vasa SwimErg so they can diagnose if swimmers use the “monospeed” pull and if so, to make corrections on land and in the pool.

If a swimmer uses the same “blade” speed through the entire stroke, it is easy for the coach to see it and hear it too. 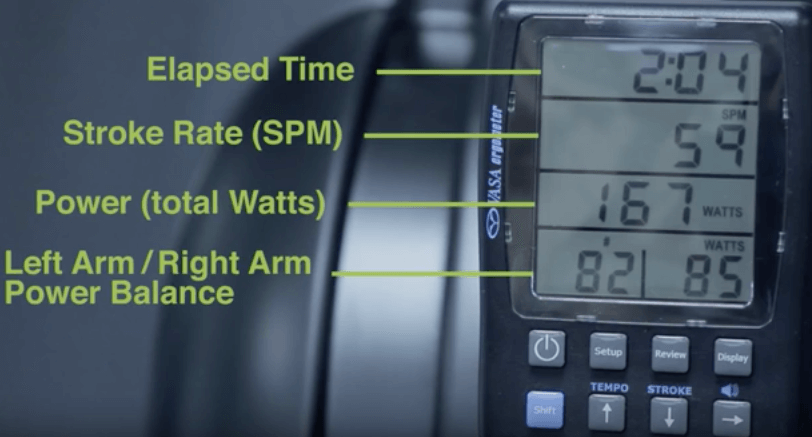 When hand speed accelerates properly, the fan wheel makes a distinctively higher pitched sound as the air passes faster through the SwimErg’s airflow system. As the swimmer accelerates the pull from catch to finish of the strokes, the fan makes a louder sound and the Watts displayed on the Power meter increase.

Coach Neilsen often reminds athletes to use the Power Meter numbers (Watts) and also the audible cues from the SwimErg.  This biofeedback is extremely valuable, especially once fatigue sets in when both cues tend to diminish.

Some coaches also like to record video while training on a Vasa SwimErg.

Combined with the power numbers, it’s easy to reveal if an athlete is not accelerating hand speed during the workout. This becomes even more valuable to identify when fatigue becomes a factor, as many athletes revert to using a monospeed pull once they tire.

Power output is another issue that can be revealed when training with a Vasa SwimErg.

Power output and right/left balance typically are lower if the athlete does not consistently accelerate the blade while pulling. When an athlete can sustain a powerful pull with hand speed acceleration from catch to finish, the average power will increase about 10 – 20 Watts.

It’s important that the swimmer maintain a steady Stroke Rate (tempo) while learning this concept using a Vasa SwimErg or in the pool. Doing that forces the athlete to find ways to increase Watts without compromising form. 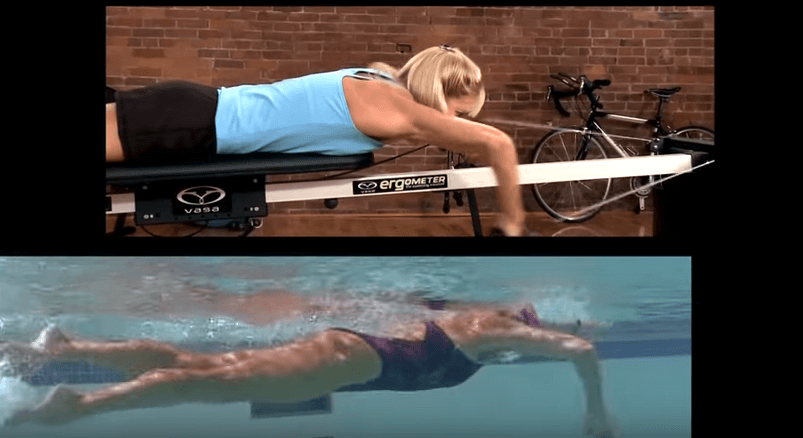 Holding a set stroke rate with a focus on accelerating hand speed at the catch will result in greater recruitment (and neuromuscular training) of the powerful back, lats, torso and core stabilizer muscles.

It is essential to integrate the learning from land training on a SwimErg and put it all together in the water to improve swimming technique, stroke timing, and efficiency.

This process will increase the swimmer’s ability to stretch and reach, get into the catch position without much downward pressure on the water, then accelerate the blade hand speed to recruit the powerful pulling muscles.

Only then can the swimmer finally relax at the finish to exit and recover.

How to Avoid Monospeed In and Out of the Water

It’s wise to implement a progression for integrating this concept to swimming in the water.

Swimmers can eliminate kicking and side breathing by using a pull buoy and snorkel, for example.

A pull buoy replicates the position used on a SwimErg, and allows the swimmer to focus just on accelerating hand speed in the pool, similar to the way it’s done on the Swim Erg. A snorkel can also help swimmers practice correct breathing patterns during this exercise.

However, coach Neilsen notes that “when using the center mount snorkel, once the swimmer knows what they are looking for, they are in a position to make the needed corrections because they can always be watching their hands.”

(In this instructional video, Ironman legend Dave Scott shows how to use a swimmers’ snorkel properly.)

Once a swimmer masters this concept and learns how to accelerate the “fingertips-to-forearm blade” while engaging the torso for rotation and stabilize their body line, they can progress by leaving off the snorkel or the pull buoy, and eventually both tools.

Coach Eric Neilsen likes to use the Vasa SwimErg to do a double arm pull with butterfly recovery with the damper door resistance set at 1.

“[This] teaches swimmers how to accelerate through the stroke and continue into a relaxed recovery that is still carrying speed. This drill is most helpful for those swimmers prone to getting stuck at the back of their stroke, for those carrying too much tension in their recovery, and of course the “mono speed” swimmer. For the advanced swimmer, I coach them to do the double arm pull with butterfly recovery while lying supine on the SwimErg bench. That challenges everything more since less of the body is supported and the athlete can get a bit more lower abdominal involved if they do slight flexion at the waist.”

It’s important to note that athletes can use a Vasa SwimErg to learn how to use acceleration at the critical part of each stroke and progressively lift swim-specific pulling power.

This is possible in part due to the isokinetic resistance provided by the airflow fan wheel in the SwimErg and the precision Power Meter display.

Monospeed swimming can be avoided if you know how to train against it.

Improvements in technique and ability to sustain higher power output learned while training on a Vasa SwimErg, for instance, are highly transferable to putting it all together in the water for a stronger, better, more efficient stroke.

If you want to learn more about how to avoid monospeed, Masters Swimming World Record Holder and technique coach Karlyn Pipes are featured in a 5-part online Freestyle swimming clinic series on learning how to improve freestyle swimming technique, efficiency, power, and endurance.

In this no-nonsense swim clinic, five essential elements for faster freestyle swimming are taught and clearly demonstrated in the pool and on land using a Vasa SwimErg.

Keep in mind that the SwimErg can be adapted and used like a Vasa Trainer to build swim-specific strength.

The Trainer Strap System attaches easily to the SwimErg so the strength exercises in this video playlist can be implemented.

Swimming, Swim Coaching, Masters swimming
Comments are off for this post.
This article is Part 2 of 2 about the importance of dryland for swimmers, featuring Tim Crowley and Dan Daly, among the World’s most respected coaches; we are privileged that they are a vital part of the Vasa community.  Read their answers to key questions important for every swimmer, swim coach, and triathlete. Vasa: Do […]
19
Oct

The Importance of Dryland Training for Swimmers

Swimming, Swim Coaching, Masters swimming
Comments are off for this post.
This article is Part 1 of 2 about the importance of dryland training for swimmers, featuring Tim Crowley and Dan Daly, among the World’s most respected coaches; we are privileged that they are a vital part of the Vasa community.  Read their answers to key questions important for every swimmer, swim coach, and triathlete. Vasa: […]
14
Jul